The best way to cook ribs is in the oven and then on the grill. This way, you make sure the meat is done, but also that the ribs have a good crust and smoky flavor.

Cooking ribs in the oven and then on the grill allows you to easily cook the ribs until the meat is done in the oven, then move the ribs to a hot grill to give them a nice crusty sear on the outside. Spending time on the grill also gives ribs a smoky flavor. Choose either baby back or spare ribs, find your favorite spice rub and barbecue sauce and you're ready to cook up perfect, juicy ribs. 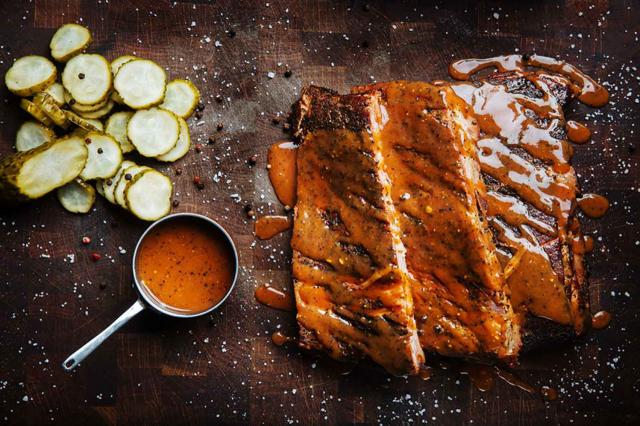 Use a sharp knife to cut loose one edge of the silver skin, the thin membrane found on the bone side of the ribs. Grab the edge with a paper towel and pull off the entire silver skin. Discard the skin.

Massage your favorite spice rub into the ribs, rubbing the mixture all over every part of the ribs. Place the ribs in a large zip-top plastic bag and set the bag in the refrigerator for two hours.

Preheat the oven to 325 degrees Fahrenheit. Remove the bag of ribs from the refrigerator and let the ribs come to room temperature while the oven preheats.

Line a large baking sheet with two layers of aluminum foil. Take the ribs out of the bag and set them on the foil. Bring up the edges of all of the sides of both sheets of foil and crimp them to form a package around the ribs.

Slide the baking sheet into the oven and cook the ribs for two hours.

Preheat the grill to medium high heat, between 200 and 250 degrees Fahrenheit. Move the charcoal briquettes to the outside perimeter of the grill or turn off one of the burners on a gas grill to prepare an indirect cooking surface.

Open the grill and brush the ribs with barbecue sauce, then flip the ribs and cook with the grill closed for another 10 minutes. Repeat this process twice more until the ribs have cooked on the grill for an hour total.

Remove the ribs from the grill with the tongs when the outsides have a nice, crusty sear. Place the ribs on a serving platter, slice them into individual ribs and serve warm with extra barbecue sauce.

Open the oven and grill as little as possible while the ribs are cooking. Opening too much will let out the heat and lead to undercooked ribs.

Use a meat thermometer to make sure the ribs are done. Cook pork ribs to an internal temperature of at least 165 degrees Fahrenheit.

Leigh Good has been writing for magazines and newspapers for more than 10 years. Her work has been published in numerous print and online publications. Good has a bachelor's degree in print journalism from Georgia State University.