Roundworms include more than 15,000 known species and up to half a million unknown species. Most do not cause disease, but several species can infect humans, causing symptoms that range from mild to severe. Although serious roundworm infections are uncommon in the U.S.

Roundworms include more than 15,000 known species and up to half a million unknown species. Most do not cause disease, but several species can infect humans, causing symptoms that range from mild to severe. Although serious roundworm infections are uncommon in the U.S., they remain a major health concern in developing nations and continue to pose risks for travelers worldwide. Several roundworm infections cause symptoms primarily related to the human digestive tract, while others typically cause muscle, lung or skin symptoms. 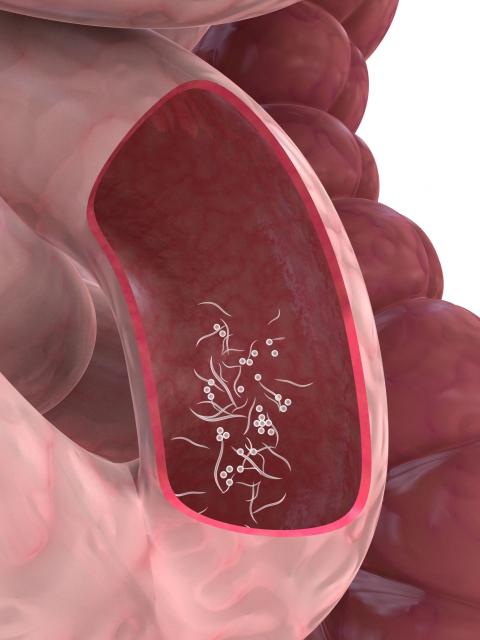 Pinworms are the most common type of roundworm infection in the U.S. These infections most frequently affect children but adult family members can be easily infected as well. Itching around the anus -- where these tiny worms lay their eggs -- is the only major symptom. Pinworm infections are easy to diagnose and treat.

Ascaris lumbricoides is a large intestinal roundworm that can grow to the size of a pencil. Infections with these worms are uncommon in the U.S. Many people experience no symptoms or occasional, mild intestinal discomfort. However, the worms may block the intestine if the infection is severe. Immature Ascaris worms travel through the lungs, which can cause coughing and wheezing.

Hookworm eggs hatch in soil and tiny, barely visible immature worms enter the body by burrowing into the skin, such as the soles of the feet when walking without shoes. The worms travel to the intestines, where they mature, attach to the intestinal lining and feed on blood, potentially causing anemia. Human hookworm infections are rare in the U.S. However, immature dog and cat hookworms can infect humans, crawling within the skin and causing itchy red tracks -- a condition known as cutaneous larva migrans.

Like hookworms, immature Strongyloides worms live in the soil and enter the body through the skin and attach to the intestine as adults. Most cases of strongyloidiasis are mild but symptoms can occur, including nausea, vomiting, diarrhea, abdominal pain and weight loss. Strongyloides infections are rare in the U.S., but cases have been reported in rural areas of the Southeast.

Trichinella roundworms primarily infect pigs and wild game, but can infect humans who eat the undercooked meat of infected animals. Symptoms from these infections range from mild to very severe and occur in 2 stages. Nausea, vomiting and diarrhea may occur 1 to 2 days after eating the infected meat. About 2 weeks later, muscle pain, fever and headache may develop.

Filarial worms and whipworms are tropical roundworms. Mosquito-transmitted filarial worms lodge in the lymph nodes and cause swelling, known as elephantiasis. Soil-transmitted whipworms, which can be found in the southern U.S., infect the intestines. Mild cases typically cause no symptoms but severe infections may cause bloody diarrhea and abdominal pain.

Some roundworm infections in the U.S. are caused species that normally infect animals but can cause disease in humans. Toxocariasis occurs when people ingest dog or cat roundworm eggs. The eggs hatch into immature worms that travel throughout the body but usually don't cause symptoms. Humans can be infected in a similar way with the eggs of the raccoon-infecting roundworm Baylisascaris. While this infection is rare, serious symptoms can occur including liver enlargement, loss of coordination and muscle control, blindness and coma.

Claudine Land holds a PhD in molecular and cellular biology, specializing in tropical medicine, parasite genetics and retrotransposons/retroviruses, with postdoctoral research experience in molecular entomology and computational genomics. A biomedical writer since 2008, she has interviewed countless medical experts in a broad range of subjects, from addiction treatment to pediatric injuries to mind-body medicine for wellness.