Roundworms are long, round parasites that may infect humans and cause health problems. Most often, people ingest roundworm larvae or eggs after touching soil, although they may enter directly through the skin, according to the National Institute of Allergy and Infectious Diseases.

Roundworms are long, round parasites that may infect humans and cause health problems. Most often, people ingest roundworm larvae or eggs after touching soil, although they may enter directly through the skin, according to the National Institute of Allergy and Infectious Diseases. Risk factors for developing a roundworm infestation include unsanitary living environments, a lack of clean drinking water and crowded conditions. Symptoms may vary, depending on the type of roundworm causing the infection and the area of the body infected. 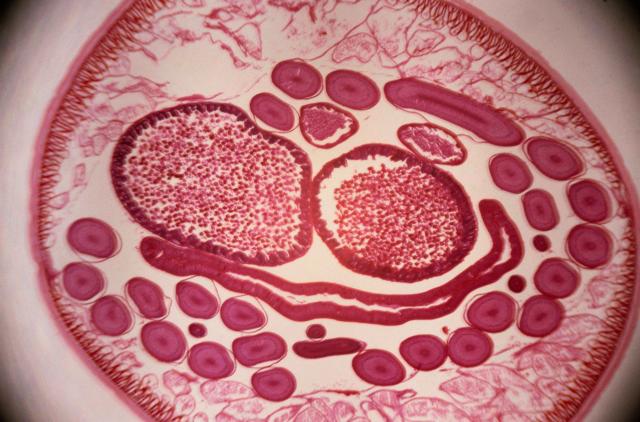 Pinworms are the most common type of roundworm to infect the intestines, according to MayoClinic.com. Symptoms of pinworms include severe itching of the anus or vaginal area that worsens at night, restlessness and insomnia, nausea and abdominal pain.

Ascariasis is an infection caused by the Ascaris lumbricoides roundworm. Many individuals do not show symptoms associated with the infection. If symptoms are present, they may include lung problems such as a cough with bloody sputum, shortness of breath and wheezing. Gastrointestinal symptoms include stomach pain, vomiting of the worms and passing worms during a bowel movement. Some individuals may also experience a fever and skin rash. The roundworms may also leave the body through the mouth and nose, according to MedlinePlus.

People typically ingest whipworm eggs after touching contaminated soil. Many individuals with a mild whipworm infection may not experience any symptoms associated with the infestation. Other individuals may experience symptoms such as a decreased appetite, pain in the abdomen and diarrhea. A massive whipworm infection may cause weight loss, chronic diarrhea, anemia and bleeding from the intestines or prolapse of the rectum, according to The Merck Manuals Online Medical Library Home Edition.

Trichinosis is a roundworm infection that may occur after a person ingests undercooked meat -- especially meats such as walrus, bear and fox -- contaminated with the eggs from the worm. Symptoms of trichinosis include abdominal symptoms after about two to seven days with additional symptoms following one to eight weeks later, according to MayoClinic.com. Common abdominal symptoms include cramping and diarrhea. The individual may also experience general discomfort throughout the body. Additional symptoms that may appear after larvae begin to migrate out of the intestines and enter the bloodstream or other tissues. These possible symptoms include headaches, weakness, muscular pain, fever, pink eye, facial or eye swelling and sensitivity to light.

Hookworms enter the human body when people walk barefoot on contaminated soil or swallow the soil. Symptoms of a hookworm infection include an itchy rash where the worm entered the body. Mild hookworm infections may not cause any symptoms, but severe infections may cause abdominal pain, decreased appetite, weight loss and diarrhea, according to the Centers for Disease Control and Prevention.

Abigail Adams began her freelance writing career in 2009, teaching others about medical conditions and promoting wellness by writing on online health and fitness publications. She is educated and licensed as a registered nurse, having received her degree from North Georgia College and State University.