Parasitic nematodes (worms) in humans can be found in the intestines, muscles and other tissues. More people around the world have a nematode infection than any other parasitic infection.

Parasitic nematodes (worms) in humans can be found in the intestines, muscles and other tissues. More people around the world have a nematode infection than any other parasitic infection. People can get infected with various nematodes through several ways: ingestion of the eggs, skin penetration by the larva or through the bite of an infected vector. 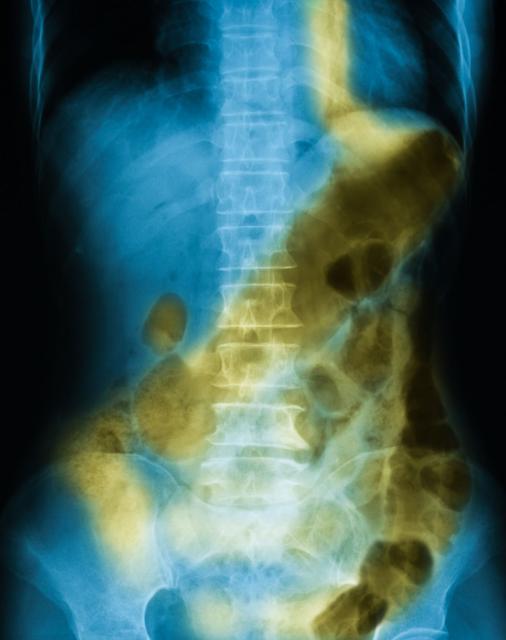 According to the Global Network in 2010, more than 807 million people worldwide are infected with the giant intestinal roundworm, Ascaris lumbricoides. The adult worm is typically pinkish-white, smooth and can grow to a length of 35 cm. People generally get infected with this parasite by ingestion of the worm's eggs (ova) through contaminated food, water or soil (hand-to-mouth transmission). The eggs are found in soil for many years because they are very resistant to environmental conditions.

Pathology of infections of A. lumbricoides can occur from either migration of the larvae though the lungs or from the adult worms in the intestine. Many people who are infected are asymptomatic, and pathology depends on the amount of worms. Heavy infections of Ascaris can lead to serious conditions, such as intestinal obstruction. Ascaris lumbricoides infection is typically diagnosed by microscopically finding the characteristic eggs in feces.

The most common nematode infection in the United States is the pinworm, Enterobius vermicularis. It is particularly common in children. The adult pinworm is thread-like and grows to a length of up to 13 mm, according to the Centers for Disease Control and Prevention (CDC). The female pinworm leaves the anus at night to deposit her eggs. People get infected through ingestion of the infective eggs.

Infection with Enterobius vermicularis is relatively mild and is usually associated with rectal itching and discomfort. Rarely, in young girls, the adult females leave the anus and accidentally migrate to the vagina and cause vaginitis.

Diagnosis is by observing the eggs on a pinworm paddle. The paddle is pressed on the perianal area, and if eggs are present, they stick to the paddle. This procedure is performed first thing in the morning before bathing or bowel movements. The paddle is then examined microscopically for characteristic eggs.

Like Ascaris, the whipworm, Trichuris trichiura, is another very common soil-transmitted nematode. The adult is characterized by a "whip-like" appearance. Trichuris is spread through hand-to-mouth transmission.

The effects of whipworm infection can range from relatively harmless to quite serious. Heavy infections of whipworm can produce bloody diarrhea, anemia and rectal prolapse. Infections with Ascaris and Trichuris in the United States are more common in the south in areas with a warm, moist climate.

Diagnosis is based on finding the characteristic eggs in fecal samples.

Hookworms are the second most common intestinal nematode found worldwide. People become infected through skin penetration by the hookworm larvae. Hookworm disease, like most nematode infections, is based on the amount of worms present. Hives and rash are generally seen at the point where the larvae penetrates the skin.

During larval migration through the lungs, a cough and bloody sputum are usual symptoms. The adult hookworm's ability to suck blood when attached to the intestines can cause serious medical problems. Heavy infections can result in enough blood loss to result in anemia.

Finding the hookworm egg in a fecal examination is the basis of lab diagnosis.

Trichinella spiralis, the cause of trichinosis, was once common in the United States, but with laws that require cooking garbage fed to pigs and better pest control around pig pens, only a few dozen infections occur in the United States annually. These few infections are usually due to hunters eating wild game they caught without cooking it thoroughly. After eating infected raw or undercooked meat, the larvae is released in the stomach, where it migrates to encapsulate in tissue, usually muscle.

Robert Herriman has been writing for the the web site, examiner.com since 2009 as the Infectious Diseases Examiner. Herriman has experience in the fields of microbiology and infectious diseases since 1989. He has previously written for "Continuing Education Topics" publication for the American Medical Technologists. Herriman holds a Master of Public Health from the University of South Florida.