Bone scans serve several medical diagnostic purposes, according to Drugs.com. They can diagnose bone tumors or cancer, detect if a patient’s cancer has spread, diagnose bone fractures and bone infections, determine the source of bone pain, and assess metabolic disorders.

Bone scans serve several medical diagnostic purposes, according to Drugs.com. They can diagnose bone tumors or cancer, detect if a patient's cancer has spread, diagnose bone fractures and bone infections, determine the source of bone pain, and assess metabolic disorders. Before a bone scan, the patient is injected with a radioactive material that travels throughout his bloodstream into the bones and organs. A specially designed camera detects the radiation emitted by the material while scanning the body. Bone scans have minimal side effects and risks, according to the American Academy of Orthopaedic Surgeons. 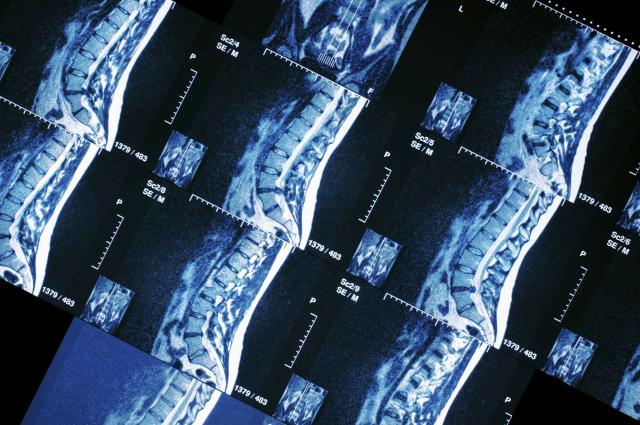 Side effects associated with the bone scan procedure include pain and discomfort. The patient may feel pain as the IV containing the radioactive material is inserted into her vein. This pain is temporary. The patient may also experience discomfort from the requirements of the bone scan procedure, such as having to remain still and lying in certain positions for extended periods of time. Bone scans can last 30 to 60 minutes, according to the American Academy of Orthopaedic Surgeons.

The radioactive material used in a bone scan exposes the patient to radiation and represents another side effect of the procedure. MayoClinic.com reports, however, that the radiation exposure from bone scans is negligible and matches the risk of exposure presented by traditional X-rays. Nevertheless, radiation may remain in the body up to three days after the bone scan, according to Drugs.com.

A side effect for a nursing mother receiving a bone scan is the possibility that the radioactive material used in the injection may contaminate her breast milk, according to Drugs.com. Nursing mothers should pump and discard their milk for two days following the bone scan to reduce the risk of passing the radioactive material to their nursing infant, according to Drugs.com.

Other potential side effects linked to bone scans include nausea, vomiting, rash and swelling.

Katina Coleman is a research psychologist who has been writing since 2004. She has published and reviewed articles in various academic journals and consults on research projects related to health and education. Her research interests center on patient-doctor communication and cancer health disparities. Coleman holds a Ph.D. in psychology from Wayne State University.