The first Ironman triathlon was held in Hawaii in 1978, and only 15 athletes started the ultimate test of human endurance. Today, there are hundreds of thousands of triathletes competing in Ironman triathlons all around the world.

The first Ironman triathlon was held in Hawaii in 1978, and only 15 athletes started the ultimate test of human endurance. Today, there are hundreds of thousands of triathletes competing in Ironman triathlons all around the world. There is such a variety of competitors that the time it takes to finish an Ironman can vary greatly. 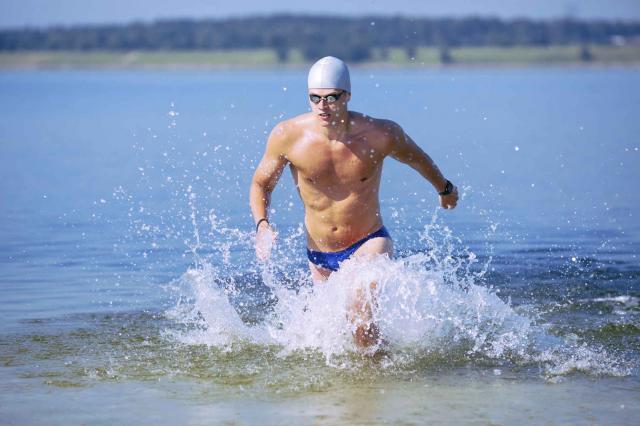 Professional athletes dedicate their lives and train extensively to compete in triathlons. They can train for hours per day, every day of the week, and everything they do revolves around competition. Therefore, their finishing times are the best at the events. For example, the top male finisher at the 2010 Ford Ironman Championship in Hawaii finished the race in 8 hours 10 minutes 37 seconds, while the top female finisher completed the race in 8:58:36.

There is also recognition for finishing the Ironman at the top of your age group. Many of the competitors who aim to finish at the top of their age group are professional or semiprofessional athletes. Age groups are broken into five-year increments. Professional male athletes in age groups up to 55 to 59 can finish the event in less than 10 hours.

Not everyone competing in an Ironman triathlon is able to commit all day, every day to competition. There are many athletes who work full-time jobs and have family commitments. A well-conditioned person still can finish an Ironman triathlon with time to spare. In 2010, the Ford Ironman Championship had a total of 1,771 finishers. The last-place finisher completed the course in 16:59:13. The actual time it takes to finish the event will depend on conditioning, training and experience.

Bill Dowis was the founding editor of "The 316 Journal," a theology and poetry journal. He covers health, fitness, food and photography, among other topics. Based in southern New Jersey, Dowis also works in banking.