Pregnancy is generally less mysterious and nerve wracking the second time around. You've been through the cravings, contractions and labor and delivery, so you know what to expect. What may come as a surprise is the way your body has changed after your second pregnancy.

Pregnancy is generally less mysterious and nerve wracking the second time around. You've been through the cravings, contractions and labor and delivery, so you know what to expect. What may come as a surprise is the way your body has changed after your second pregnancy. Carrying another baby often makes your muscles looser, making it harder for you to get back into shape. By anticipating the changes, you'll be prepared to utilize a healthy diet and daily exercise to lose weight on a new schedule. 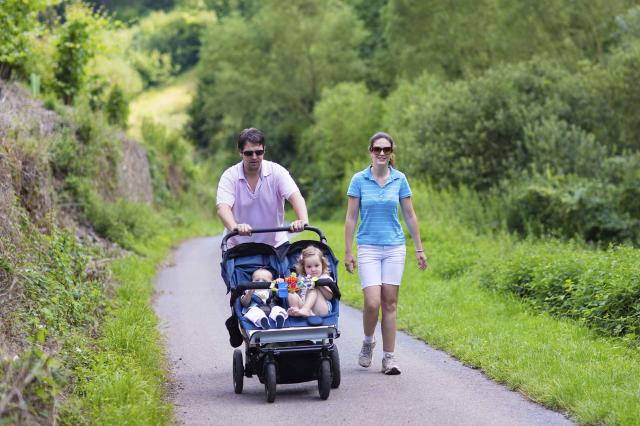 During your second pregnancy, your muscles are naturally looser, which often means you'll carry lower than you did during your first pregnancy. The added stress on the skin results in stretched muscles and skin, so more stretch marks are a possibility, even if you didn't see them during your first pregnancy. Looser muscles mean that unless you exercised diligently throughout your pregnancy, it could be difficult for you to get back to your pre-pregnancy shape. In some cases, skin and muscles are so stretched that your shape has changed permanently.

Your muscles and shape aren't the only body issues to be affected by multiple pregnancies. After your second labor and delivery, you'll likely find that the days, weeks and months following the delivery of your baby are wrought with fatigue as a result of a difficult schedule. With two children, you're spending nights caring for a baby and days giving attention to your other child. Sleep as often as you can and get help if your fatigue makes it hard for you to concentrate or make logical decisions.

It's likely that after your first baby, it was easier to arrange to make exercise a daily priority. Unfortunately, the time constraints after having a baby could limit the amount of time you have to exercise, making you even more frustrated about the general state of your body. Getting at least 30 minutes of exercise per day is more manageable when broken into 10 minute increments. Go for a walk outside, complete strength training while your children nap or engage your older child in a soccer game to stay "in the loop" until you have more time to tone up.

Kay Ireland specializes in health, fitness and lifestyle topics. She is a support worker in the neonatal intensive care and antepartum units of her local hospital and recently became a certified group fitness instructor.