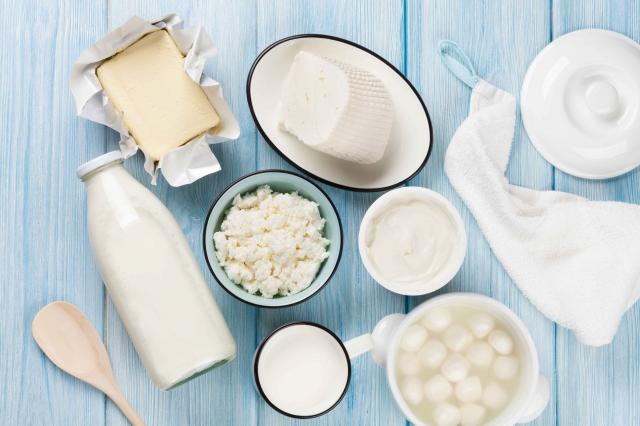 You rarely think about food safety when you shop and cook. Yet, activists remain concerned about the possibility of foodborne disease. Farmers have, for many years, given livestock growth hormones to increase their yield. These hormones and related residues may eventually end up in your dairy and meat products, resulting in positive and negative effects on your body.

A 2018 paper in Pediatric Endocrinology Reviews tells about the discovery of somatotropin, a chain of amino acids known as human growth hormone or hGH. Researchers have been trying to stimulate human growth with this hormone since 1932, but it actually plays many roles in your body.

Scientists have developed artificial ways to increase growth hormone levels in livestock. They can inject species-specific analogs of somatotropin, or they can genetically alter the animal. The goal of either method remains the same: to help farmers create more productive animals.

The U.S. Food and Drug Administration, FDA, doesn't allow any other use of rBGH in cattle. They also don't allow the use of growth hormone in poultry or swine. However, temptation among farmers to abuse regulations seems likely, given the potential profits.

There are also legal ways around the regulations. For example, the FDA has approved genetically modified salmon. These fish have high levels of growth hormone and show an enhanced musculature.

Changing the growth hormone levels of livestock and fish affects not only the animals, but the bodies of those who consume these products. A diet rich in dairy products — especially milk — increases your hormone levels. The finding suggests that some transfer and some absorption of milk-related hormones occurs when you drink milk. These changes should cause concern because of the potential for endocrine disruption.

Growth hormone has other positive effects in addition to enhancing muscle mass, body weight and size. Treating hGH-deficient children improves the functioning of their pancreas and heart. Most important is that rhGH use improves quality of life.

It still isn't known whether these positive effects would occur in children and adults with normal levels of growth hormone. Such use is associated with side effects and brings up ethical concerns.

Growth hormone, unfortunately, also causes unwanted changes to your body. The well-known increases in insulin-like growth factor appear especially dangerous. This change correlates with an increase in cancer risk and a decrease in life expectancy.

The primary role of this hormone is promoting cell growth and preventing cell death. Like growth hormone, injecting insulin-like growth factor causes anabolic effects such as muscle enhancement and bone growth. This has resulted in athletes abusing it to gain a competitive edge.

Read more: Which Types of Milk Have the Most IGF-1?

Read more: 10 Changes You Can Make Today to Help Cut Your Cancer Risk

Cancer treatment has plateaued in recent years. Tumors resist standard treatments in many cases. Insulin-like growth factor may play a role in this resistance, according to a 2016 paper in the International Journal of Molecular Sciences.

A 2016 report in Oncotarget illustrates this problem in breast cancer patients. Tamoxifen remains the primary drug used to help treat breast cancer. But many patients develop a resistance to this useful drug, increasing their risk of not surviving treatment.

Be Aware of Your Exposure

Further exposure to antibiotics through animals can result from farmers typically giving antibiotics to injured animals. These can leach into dairy and meat products that are purchased and consumed. Such exposure may explain the antibiotic resistance now seen in many medical conditions.

Read more: Side Effects of Long-Term Antibiotic Use

Injecting animals with growth hormones also brings up animal welfare issues. Nearly 90 percent of feedlot cattle receive some form of injection, according to a 2017 paper presented at the Southern Agricultural Economics Association meeting. In addition, farmers have increased their use of artificial growth hormones.

This increased, heavy use of hormones alters daily interactions between farm animals. A 2015 report in Applied Animal Behaviour Science looked at the behavior of steers given growth-promoting drugs. Compared to controls, implanted animals engaged in more aggressive actions like pushing each other. The enhanced growth also seemed to affect the animals' ability to stay upright. Implanted animals spent 31 percent more of their time lying around.

The use of hormones to increase animal size also affects the environment. Confined animals make three times more waste than humans, according to a 2018 paper from Seton Hall University. These 65 million animals account for about 15 percent of all greenhouse gases.

The authors of a 2017 report in the Proceedings of the Nutrition Society suggest that current levels of dairy and meat production may be unsustainable. The Earth appears burdened by factory farming and its consequences — antibiotic resistance, climate change and crowding. A shift away from growth hormone injections and a move toward free-range farming could ease this burden.

Dr. Bryan Myers writes wellness articles as a social activist working from a scientific perspective. Extensively trained in nutrition and fitness, he has presented his theories and research in medical journals. Dr. Myers has also written hundreds of health articles as a science journalist. He has degrees in experimental psychology from the University of Toledo and in behavioral neuroscience from Bowling Green State University. Dr. Myers now works as a clinical exercise physiologist in Ann Arbor.