The practice of Sudarshan Kriya yoga focuses on four breath forms: Ujjayi, "victorious breath;" Bhastrika, "bellows breath;" the chant of "om;" and Kriya, "purifying breath." Kriya yoga breathing techniques can effectively address symptoms of anxiety and depression, according to a 2009 study published by the Harvard Medical School. Sudarshan Kriya yoga requires discipline and dedication; however, its breathing techniques are easy to learn. 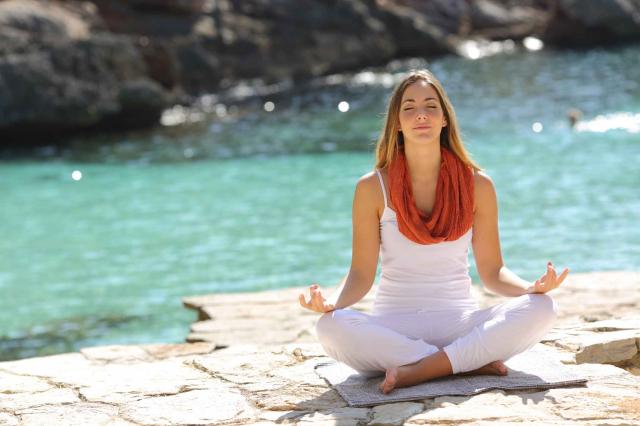 Begin by assuming a comfortable seated position. Expect to spend a minimum of 15 minutes performing the breathing exercises. The hOMe Foundation suggests placing in your line of sight a silent clock with a moving second hand or a digital clock that measures seconds along with minutes and hours.

To perform kriya breathing, take several elongated deep breaths. Breathing in and breathing out should each take about 10 or 15 seconds. As you breathe in, direct the pranic energy, or life energy, into your heart center. This energy flows from the back of your head, through the medulla and into your heart. As you exhale, the flow of energy reverses itself. Finish with the repeated chant of "om," which creates vibrations in the abdomen, chest and throat.

Practicing yoga postures and breathing exercises can relieve stress and make managing chronic health conditions easier. Sudarshan Kriya breathing exercises have assisted with the mental and emotional recovery of survivors of Hurricane Katrina, the 2004 Indian Ocean tsunami and Australian veterans of the Vietnam War. Two studies compared Kriya yoga with conventional depression treatments for hospitalized patients and patients at an alcohol detoxification program in Bangalore, India. They showed improvement rates of 67 percent and 75 percent, respectively, for the patients who performed yoga exercises, according to the Harvard Medical School. To achieve maximum benefit, take a slow, steady pace, and concentrate on gentle poses and stretches.

Chris Blank is an independent writer and research consultant with more than 20 years' experience. Blank specializes in social policy analysis, current events, popular culture and travel. His work has appeared both online and in print publications. He holds a Master of Arts in sociology and a Juris Doctor.