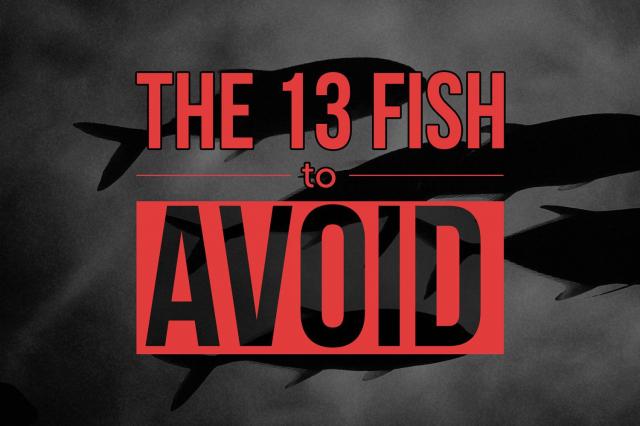 Eating seafood is supposed to be healthy -- right? Well, that depends. "Marine pollutants pose increased risks to environmental and human health," says Brian Clement, author of "Killer Fish: How Eating Aquatic Life Endangers Your Health" and co-director of the Hippocrates Health Institute. Some fish are contaminated with metals, industrial chemicals, pesticides and parasites, which can be detrimental to our health and surrounding environment. Other risks include foodborne illnesses and fraudulent marketing practices. In addition, unsustainable fishing practices have a significant impact on our marine ecosystem. Many species are severely overfished, or become bycatch, which is the incidental capture and death (and waste) of non-target fish and other marine animals during commercial fishing. Global bycatch is estimated to be about 40 percent of the world's total catch -- totaling 63 billion tons. Which are the fish that are most essential to avoid eating? Read on... 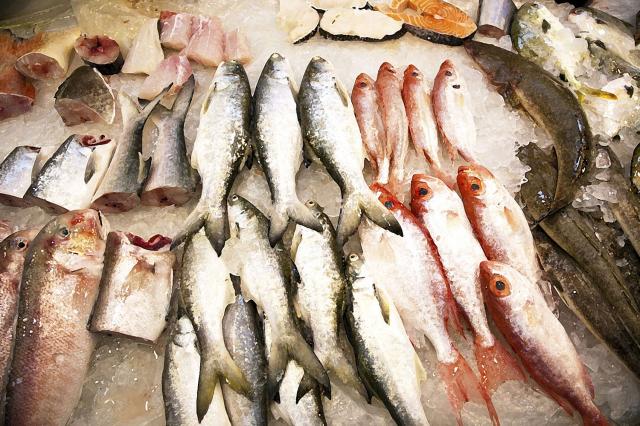 When purchasing fish in a market or at a restaurant, it's important to read the label and ask questions so that you can make a more informed purchase. What is the country of origin? Is it wild-caught or farm-raised? If wild-caught, was it caught with poles or longlines? And if farmed, was it in an open pen (potential contamination) or in a contained tank or pond? Be leery of fish that is out of season or offered at a price that seems too good to be true. Fish fraud (substituting a less expensive fish for a more expensive kind) is a common problem in markets and restaurants globally. Other tips? When buying wild fish at the store, look for the Marine Stewardship Council (MSC) eco-label on the packaging to be sure proper fishing practices were used. Also, downloading the Seafood Watch Mobile App from the Monterey Bay Aquarium will help you make smarter choices at point of purchase. 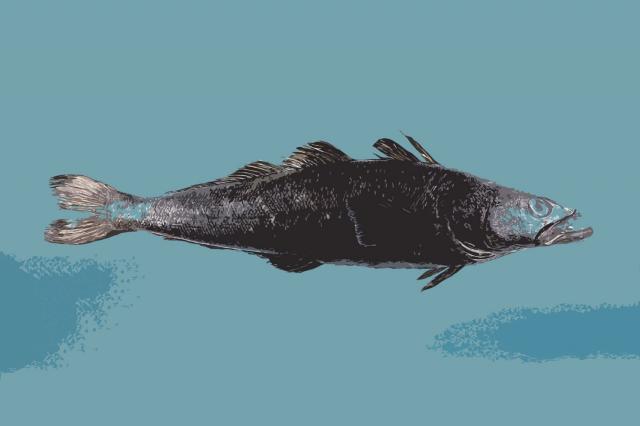 If you want to eat this fish, be very choosy about where it comes from. Chilean sea bass has high levels of mercury and should only be consumed twice per month by adults (assuming no other contaminated fish are consumed). It's also threatened by overfishing. Chilean sea bass is in high demand but global stocks are shrinking. In particular, stay away from those from the Crozet Islands, Prince Edward and Marion Islands, and Chile, where overfishing is rampant. In addition, these places have no recognized stock assessment and other species are often caught and threatened as part of the harvest. As an alternative, choose longline-caught Chilean sea bass from Macquarie Island in the South Pacific, the Falkland Islands, off the coast of Argentina, or the remote Antarctic Heard and McDonald Islands. Also look for the blue eco-label of the MSC for certified sustainable products. 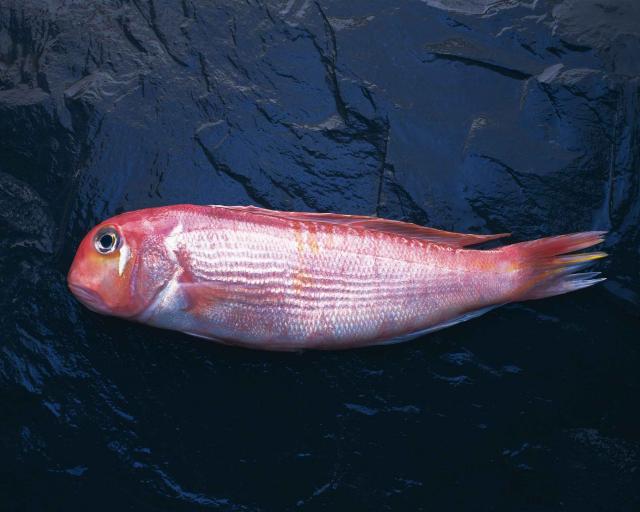 "This is a fish to avoid entirely," says Brian Clement, co-director of the Hippocrates Health Institute and author of "Killer Fish: How Eating Aquatic Life Endangers Your Health." Tilefish has some of the highest levels of mercury and the Environmental Protection Agency (EPA) recommends a maximum of one serving per month for adults (assuming no other contaminated fish are consumed). The tilefish is currently overfished and there are significant bycatch issues. If you are going to enjoy tilefish, look for fish from the U.S. mid-Atlantic which has better fishing practices.

Related: Meet the Women Who Are Changing Health and Wellness 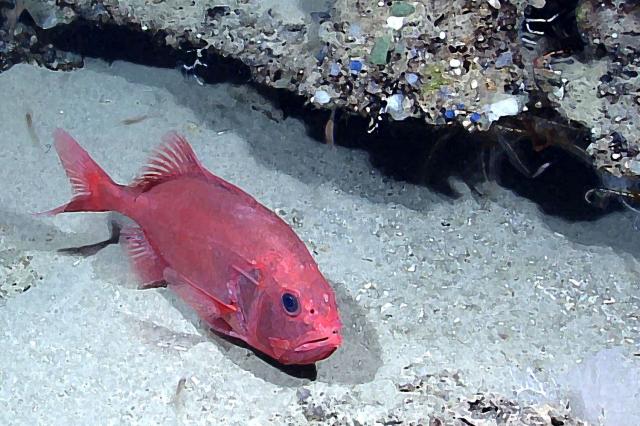 Orange roughy can live up to 100 years but despite being one of the longest-living fish, the global stock of orange roughy is low due to their slow reproductive cycle and overfishing. "Although ocean fishing has become extremely regulated, stock has not recovered from the boom in popularity of this fish," says chef Frankie Terzoli. The orange roughy has been given the "Avoid" ranking by the Monterey Bay Aquarium's Seafood Watch because of overfishing and the damaging trawling method that fishermen use. Additionally, the Environmental Defense Fund has issued a health advisory, warning of high mercury levels in orange roughy. 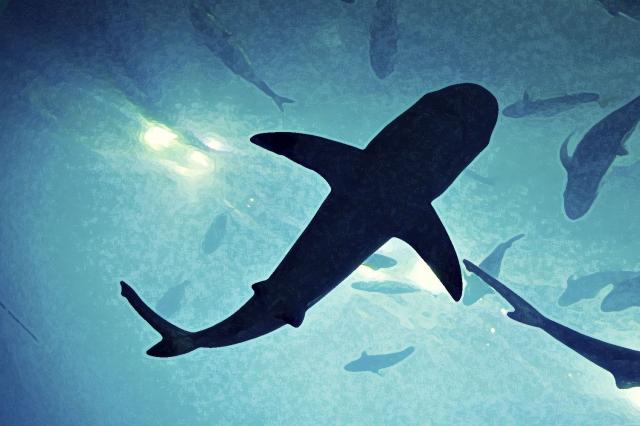 Mercury moves up the food chain. When it falls as part of rain or snow, it contaminates our natural water sources. Mercury is taken up by small aquatic plants and animals which are consumed by bigger fish, which are then consumed by even bigger fish, so the mercury levels build up via a process called "bioaccumulation." The Environmental Defense Fund advises against eating shark because of its high levels of mercury, and also because shark populations are at historically low levels as a result of overfishing. It's estimated that half of the sharks killed each year are a result of bycatch.

Related: 18 Foods With a 'Bad Rap' That Are Actually Good for You 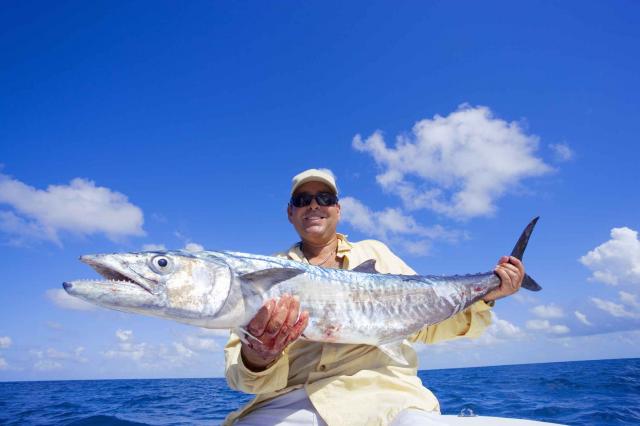 This fish should be avoided completely. King Mackerel has some of the highest levels of mercury. The EPA recommends that woman and children avoid entirely and men should consume less than one serving per month (assuming no other contaminated fish are consumed). Why take the risk? As an alternative, Atlantic mackerel is low in mercury levels and has earned a "Best Choice" eco-rating from the Monterey Bay Aquarium's Seafood Watch. 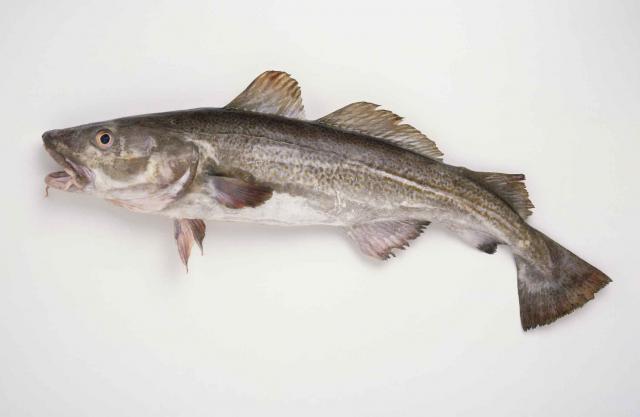 Atlantic cod has been overfished and has suffered massive population declines, according to chef Frankie Terzoli. In general, most Atlantic cod should be avoided or limited except for cod raised in recirculating aquaculture systems (RAS). These systems are maintained on land and the inputs and outputs are highly controlled, decreasing the impact on habitat. Their population sizes are also monitored.

Related: 4 Heart-Healthy Side Dishes to Go With Fish 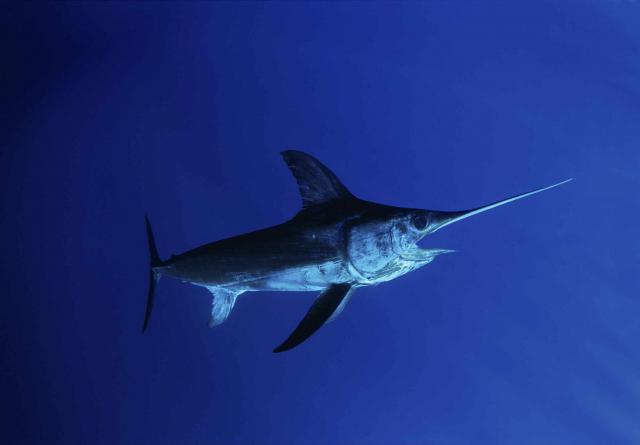 Swordfish contains some of the highest levels of mercury among fish, and keep in mind that mercury levels accumulate over time. The EPA recommends one serving per month for adults (assuming no other contaminated fish are consumed), and swordfish should be avoided by children completely. Additionally, most swordfish are caught using long lines, a method that also catches threatened or endangered creatures, including turtles, sharks and seabirds.

Related: Sign Up to Receive the FREE LIVESTRONG.COM Weekly Health and Fitness Newsletter 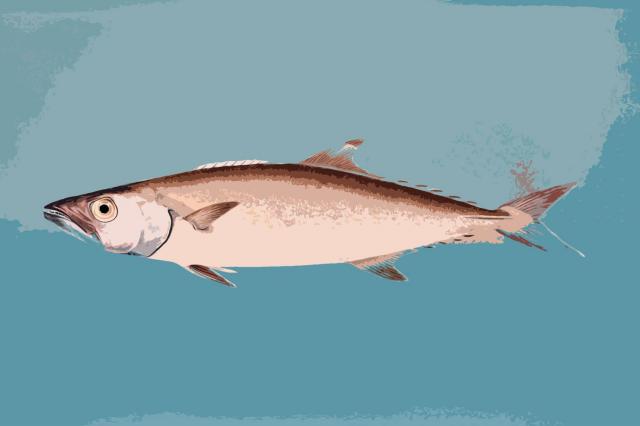 Often sold as "white tuna," escolar is considered outrageously delicious, however eating too much of it can cause keriorrhea â”€ an unpleasant form of diarrhea. Escolar contains an indigestible fatty substance called gempylotoxin, which gives the fish its lusciously buttery taste and texture, but it can cause intestinal problems if a diner overindulges. Keep this in mind when ordering or buying the fish and stick to a serving of 6 ounces or less.

Related: The 14 Best Foods for Your Heart 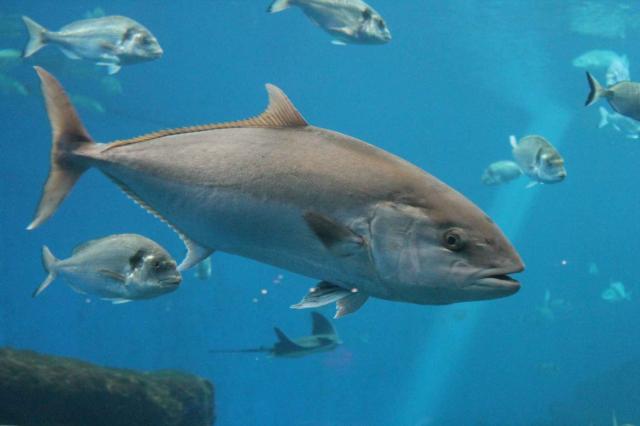 Most types of tuna, including yellowfin, albacore, blackfin, bigeye and light tuna contain moderate to high levels of mercury. Bluefin tuna has elevated levels as well but it also scores poorly in eco-friendliness. Longlines are the most common method of catching and this results in high numbers of bycatch. Also, because of the high demand of bluefin tuna (mostly for sushi), the species has been greatly overfished. These fish grow to an average of 500 pounds and are slower to mature -- they're often caught before they've had a chance to reproduce. 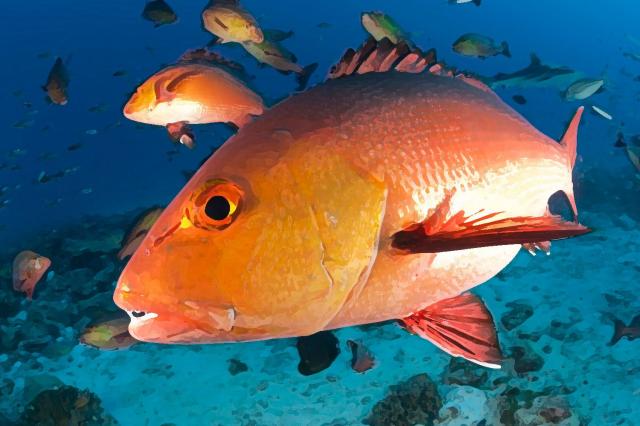 Red snapper makes Seafood Watch's "Avoid" list because of a persistent overfishing issue resulting in a severe decline in the population since the 1980s. You should also exercise caution if purchasing red snapper because "true" red snapper (which ranges from Massachusetts to Mexico) is often mislabeled in the market. Other fish including tilapia and rockfishes are commonly marketed under the red snapper name. Better alternatives to red snapper include black cod and striped bass. 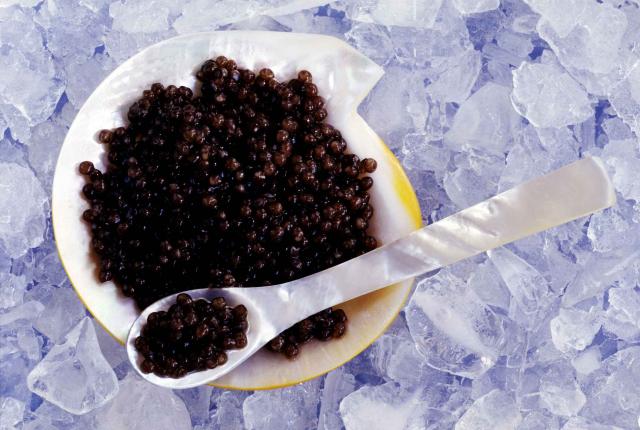 Caviar is the roe, or eggs, of the fish. Black caviar is harvested from sturgeon, which is greatly overfished. "These gentle prehistoric giants have survived for millions of years unchanged, but due to the high demand for their eggs they are almost extinct," says Frankie Terzoli. Paddlefish and sturgeon are "long-lived, slow-growing fish that reproduce late in life," which increases their risk of overfishing according to the Monterey Bay Aquarium's Seafood Watch. 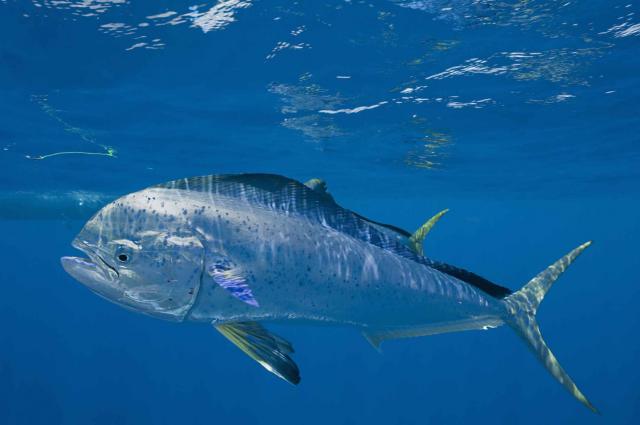 Seafood lovers should proceed with caution when it comes to mahi mahi. This fish can cause histamine poisoning, or scombroid poisoning. If not refrigerated properly, bacteria breaks down the amino acid histidine in the fish, forming histamine, which can cause an illness that resembles an allergic reaction. "This fish is a histamine producer if not cared for throughout the supply chain," says chef Frankie Terzoli. Some mahi mahi with unusually high levels of histamine will not appear spoiled at all, while others may have a bad odor or a honeycombed appearance when cooked. Other fish that can cause scrombroid poisoning include tuna, mackerel, skipjack and bonito. Buying from reputable sellers may lower the chance of contracting the illness. 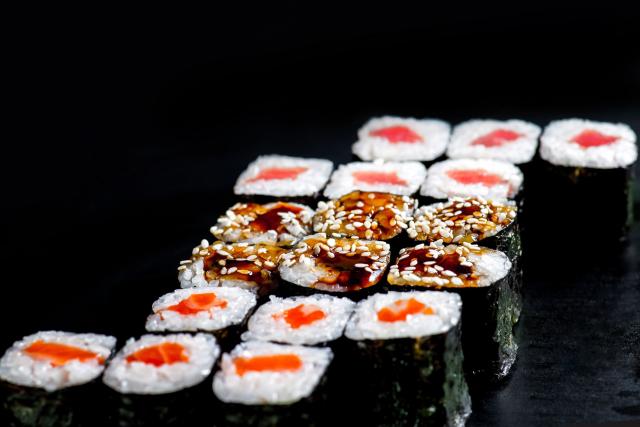 If you buy grocery store tuna rolls, understand that most are made from substandard seafood. The low-quality tuna that they contain has usually been treated with filtered carbon monoxide to change its color to red, extending its shelf life, cautions chef Frankie Terzoli. "Tuna that says 'previously frozen' and is still bright red in color has been treated to ensure the meat looks fresh," he adds. This means you can't judge freshness by the way the fish looks. Also think twice before buying a seafood tray in your local grocery store. "Often it's packed outside the store and subject to a long distribution time," says Frankie Terzoli. "Because the seafood supply chain isn't tracked very well, it's hard to have confidence in a product that has changed hands and sat in a warehouse for any amount of time."

Related: Which Is Better: Wild-Caught or Farmed Fish?

Print or Pin This Article 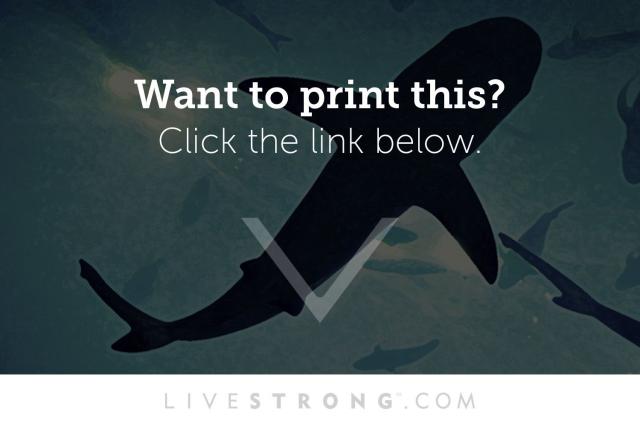 Click the link below for a printable version of "The 13 Types of Fish to Avoid." 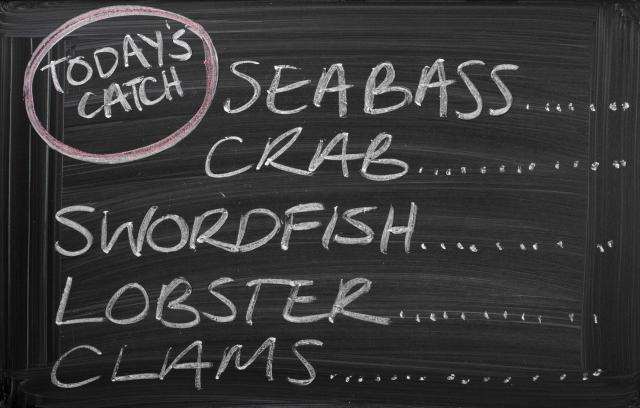 Are you a fan of seafood? Do you avoid certain seafood options -- and if so, why? Did any fish on this list surprise you? As an alternative to this list, which other fish do you enjoy eating? Let us know by leaving a comment below.

Related: 17 Reasons Why You Probably Need More Omega-3s in Your Diet

Based in Southern California, Lynette Arceneaux has worked as a writer and editor since 1995. Her works have appeared in anthologies, such as "From the Trenches" and "Black Box," in the magazine "Neo-opsis," and on numerous websites. Arceneaux, who holds a Master of Arts degree, currently focuses on the topics of health and wellness, lifestyle, family and pets.