Genetics determines eye color, but the inheritance patterns are complex. Because of this complexity, children can have different eye colors than their parents. Iris eye color can change during a person's lifetime for several reasons.

Genetics determines eye color, but the inheritance patterns are complex. Because of this complexity, children can have different eye colors than their parents. Iris eye color can change during a person's lifetime for several reasons. Some of the reasons for the changes are harmless, such as normal development and aging. Other eye color changes may be due to medication or a medical condition. 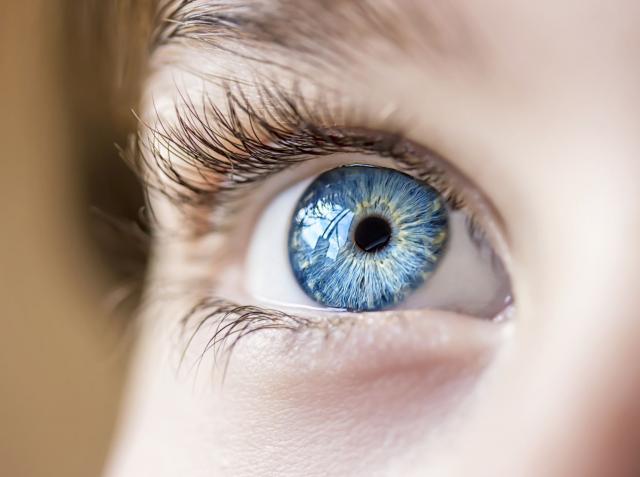 Many babies of Caucasian heritage are born with blue or blue-gray eyes. As the child ages, the color of the eyes may darken due to production of more pigment in the iris. This can lead to darker colors, ranging from green to hazel to various shades of brown. Babies born with brown eyes typically exhibit little change in eye color over time, but might experience some darkening. In most cases, eye color becomes permanent by a child's first birthday.

In a minority of people, eye color can continue to change beyond infancy. This phenomenon is more common in people of Caucasian heritage. A hallmark study published in May 1997 in "JAMA Ophthalmology" reported that 10 to 15 percent of white children experienced subtle changes in eye color after age 6 and into early adulthood. The study authors noted that the probability of experiencing eye color change into adolescence and early adulthood appears to be genetically determined. People with dark colored irises are less likely to experience noticeable eye color changes compared to people with light colored irises.

Fuchs uveitis syndrome -- also known as Fuchs heterochromic uveitis and Fuchs heterochromic iridocyclitis -- is a condition characterized by chronic, mild inflammation of the middle portion of the eye, called the uvea. This layer of the eye includes the iris, along with other structures. Fuchs uveitis syndrome most commonly affects one eye. This typically leads to lightening of the iris of the affected eye, although in some cases the condition causes iris darkening. The end result is a difference in eye color between the eyes, or heterochromia. A change in eye color may be the first or only sign of Fuchs uveitis syndrome. The condition is associated with an increased risk for cataracts and glaucoma.

Horner syndrome describes a triad of symptoms caused by impairment of specific fibers in the third cranial nerve that innervate the eye and face. With Horner syndrome, the eyelid on the affected side is slightly droopy and the pupil in that eye is smaller than normal. Reduced or absent sweating on the involved side of the face is also present. There are many possible causes of Horner syndrome. If the condition occurs before a child's first birthday, the iris of the affected eye may be lighter in color than the other eye. A difference in eye color may also occur in acquired Horner syndrome in adults, although this is rare.

Pigment dispersion syndrome and pigmentary glaucoma are related eye diseases in which the pigment in the iris is disrupted and the loose pigment granules collect in the front chamber of the eye. With pigmentary glaucoma, these pigment granules block normal fluid flow through the front chamber of the eye. This causes glaucoma, wherein increased pressure in the eye can lead to vision loss. The dispersion of pigment from the iris can cause eye color changes, and the two eyes may be different colors if they are affected unequally.

Some glaucoma medications can cause a change in eye color. For example, eye drops like latanoprost (Xalatan) and bimatoprost (Lumigan) that are prescribed to lower internal eye pressure in people with glaucoma can cause darkening of light-colored eyes due to an increased amount of pigment in the iris. Another form of bimatoprost (Latisse), which is applied to the upper eyelid margin to enhance eyelash growth for cosmetic purposes, is also reported to cause this effect in some people. Darkening of the irises due to these medications may be permanent.

Other Causes and Cautionary Notes

There are other possible medical causes of changes in eye color, including cancerous and non cancerous tumors of the iris, and traumatic eye injuries. A significant change in color affecting one or both eyes should be evaluated by an eye doctor. Seek care as soon as possible if the eye color change is associated with an eye injury or other symptoms, such as eye pain or redness, and blurred or limited vision.

Dominique Brooks has been a medical editor for over 10 years. She has worked in medical education for physicians, nurses and pharmacists as well as consumers. She started writing business articles for Work.com in 2008 and health articles online in 2009. She holds a Master of Business Administration from the University of Alabama and a Doctor of Medicine from Vanderbilt University.