Dietary fiber comes from plant-based foods your body cannot digest. It exists in two varieties: soluble and insoluble. Soluble fiber, which is dispersible in water, forms a gel-like substance that slows down digestion.

Dietary fiber comes from plant-based foods your body cannot digest. It exists in two varieties: soluble and insoluble. Soluble fiber, which is dispersible in water, forms a gel-like substance that slows down digestion. This delays intestinal absorption of sugar and starch, and as a result, cholesterol levels sink, which may protect you from heart disease and stroke. Insoluble fiber, which does not dissolve in water, accelerates the movement of food through your stomach and adds bulk to your stool, speeding bowel movements. Getting 25 to 30 grams of fiber in your daily diet may have other health benefits as well. 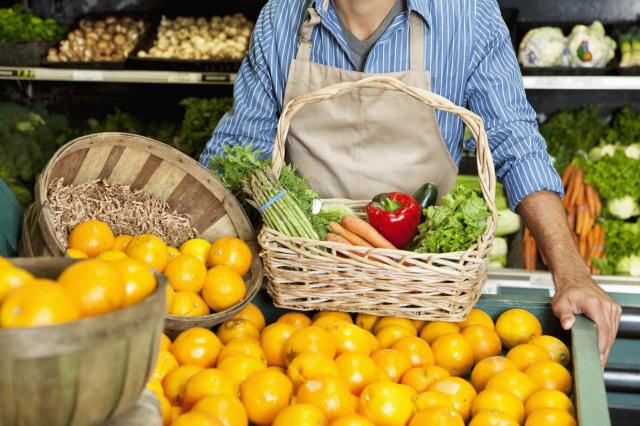 Heart and blood vessel disease, also called heart disease, is the major cause of death in U.S, reports the Harvard School of Public Health. Heart disease includes problems related to atherosclerosis, a condition that occurs when a substance called plaque begins to accumulate on the walls of the coronary arteries. Plaque buildup narrows the arteries and makes them stiff, reducing blood flow to your heart muscle. This creates a risk for stroke or heart attack. A study published in the February 2004 issue of "Archives of Internal Medicine" found an inverse relationship between dietary fiber intake and risk of heart disease. According to a study reported in "Diabetes Care" in February 2004, increasing the intake of cereal fiber and whole grains may cut the odds of having metabolic syndrome, an amalgamation of factors, including high blood pressure, high insulin levels and high levels of triglycerides, which multiply your risk for diabetes and heart disease.

Type 2 diabetes, the most common form of diabetes, develops when the body fails to produce enough insulin to bring the blood sugar to normal levels or cannot efficiently utilize the insulin it produces. A study of male health professionals published in the September 2002 issue of "The American Journal of Clinical Nutrition" found an association between a diet rich in cereal fiber and a lower risk of Type 2 diabetes. The study also emphasized trading refined-grain foods for whole-grain foods. In contrast, a diet low in cereal fiber and high in rapidly absorbed carbohydrates increases the risk of Type 2 diabetes, reported a study published in "The American Journal of Nutrition" in August 2004.

Including fiber in your diet can help you maintain a healthy weight. Clinical studies and human case reports suggest that consuming soluble fiber such as guar gum, psyllium and pectin may help you stay feeling satiated and keep you from overindulging, which can result in weight gain, notes the University of Maryland Medical Center. In addition, according to a research published in "The American Journal of Clinical Nutrition" in February 2010, increasing fiber intake may help you maintain a healthy waist circumference. Other examples of soluble fiber include beans, peas, fruits, barley and oats.

Diverticulitis, an inflammation of the intestine, is estimated to affect one-third of all those ages 45 and up and two-thirds of those over age 85, reports the Harvard School of Public Health. A study published in the April 1998 issue of "The Journal of Nutrition" concluded that men who ate dietary fiber, particularly insoluble fiber, significantly reduced their risk of diverticular disease. You can find insoluble fiber in wheat and corn bran, whole-grain products, whole-grain cereals, vegetables and in peels of fruits such as blueberries, grapes and apples.

Mala Srivastava covers health and business for several online publications. She holds a Master of Science in microbiology from India's HNB Garhwal University and a Master of Pharmaceutical Business Management from ICFAI University.