Because of their role in promoting heart health, the American Heart Association (AHA) recommends omega-3 fatty acid intake by healthy people and those with cardiovascular disease. According to PharmacistÆs Letter, omega-3 fatty acids are a type of polyunsaturated fat.

Because of their role in promoting heart health, the American Heart Association (AHA) recommends omega-3 fatty acid intake by healthy people and those with cardiovascular disease. According to Pharmacist's Letter, omega-3 fatty acids are a type of polyunsaturated fat. They include eicosapentaenoic acid (EPA), docosahexaenoic acid (DHA) and alpha-linolenic acid (ALA). While obtaining omega-3s from food sources is preferable, if you have coronary heart disease (CHD) you may not get enough from diet alone and should talk with your doctor about the benefits of supplementation. 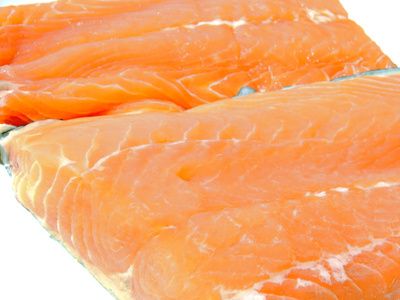 The AHA recommends eating fish, especially fatty fish, at least two times a week. A serving is 3.5 ounces cooked fish or ┬Š cup flaked fish. For those with documented CHD, they recommend 1 g EPA + DHA per day, preferably from fatty fish. If you are unable to consume this amount daily from food, they recommend consulting your doctor about taking it in capsule form. As a therapy for lowering triglycerides, a higher dose is neededŌĆö2 to 4 g EPA + DHA per day, provided as capsules under your physician's care.

Salmon provides omega-3 fatty acids in the form of EPA and DHA. A 3-ounce serving of fresh or frozen salmon provides 1.1 to 1.9 g total omega-3, according to the AHA. Of the commonly eaten fish that are low in mercury, it is the richest in EPA + DHA. Salmon and other fatty fish contain predominantly heart-healthy polyunsaturated fat, rather than saturated fat.

According to Pharmacist's Letter, fish oil capsules are a convenient way to get omega-3s, especially if you need high doses. They are sold over-the-counter, or as a prescription. While capsules are generally low in mercury and other pollutants, the website Pharmacist's Letter cautions that because they are not a drug their quality and content varies. It recommends choosing a product that is USP VerifiedŌĆöthis confirms that the product contains what the label states and has been tested for contaminants. Also, choose a product based on the EPA + DHA content, not the total amount of fish oil. A review of the fifteen USP Verified fish oil supplements listed in the Natural Medicines Comprehensive Database revealed that most contained 300 mg EPA + DHA per 1000 mg fish oil capsule; the highest contained 570 mg.

The AHA lists the EPA + DHA content of other seafood, in grams per 3-oz. serving: flounder or sole, 0.48; pollock, 0.48; crab, 0.27-0.40; shrimp, 0.29; catfish, 0.22-0.30; clams, 0.25; scallops, 0.18 to 0.34; light canned tuna, 0.17 to 0.24; cod, 0.15-0.24. The AHA also recommends eating foods rich in ALA, such as soybeans, canola oil, walnuts and flaxseed. Pharmacist's Letter reports that flaxseed seems to modestly lower total and LDL cholesterol and is high in soluble fiber. Walnuts may decrease CHD risk, modestly lower total and LDL cholesterol and increase HDL. Krill oil supplements also contain omega-3 but in smaller amounts than in fish oil; they have not been proven to have the same heart benefits.

Cautions and Side Effects

The Environmental Protection Agency recommends that you avoid shark, swordfish, king mackerel or tilefish due to their high mercury content. Choose fish that are low in mercury, such as shrimp, canned light tuna, salmon, pollock and catfish.

Fish oil supplements can cause nausea, heartburn or loose stool, according to Pharmacist's Letter. Refrigerate or freeze supplement capsules to decrease fishy aftertaste. Discard capsules with a very strong or spoiled taste. There is a small increased risk of bleeding or bruising when taking 3 g or more per day; check with your doctor if you take aspirin, warfarin or clopidogrel. Also, get approval from your doctor before taking fish oil capsules if you are allergic to fish.

Catherine Cox started writing in 1989. She has been published by ōNutrition and the M.D.ö and ōConsultantö and has written client education materials for health-care organizations. A dietitian and diabetes educator, Cox holds a Master of Public Health in nutrition science from the University of California, Los Angeles.