We take a look at some of AmericaÆs biggest fast food chains to determine the highest-calorie fast food burgers, and determine how those burgers stack up in terms of fat, sodium and unhealthy ingredients. 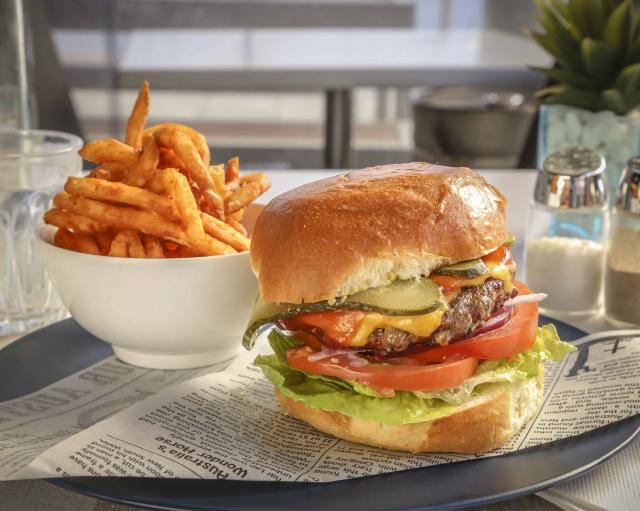 Do you hit up the drive thru every so often to get a fast-food burger fix? While it's no surprise that fast food isn't great for you, not all burgers from America's major chains are created equal. Here, we take a look at the worst burgers for you in terms of calorie and saturated fat content. We also consider nutritional factors like sugar (hello, super-sweet BBQ sauces) and sodium (we see you, bacon) when ranking these patties.

And if you think burgers were always this gargantuan and caloric, we'll have you know that the average cheeseburger today is nearly 80 percent higher in calories than it was 20 years ago, according to the National Institutes for Health. From a McDonald's burger with 18 grams of sugar to a Steak n' Shake burger with an obscene amount of trans fat, here are the worst fast-food burgers that'll make you want to cook all your burgers at home. 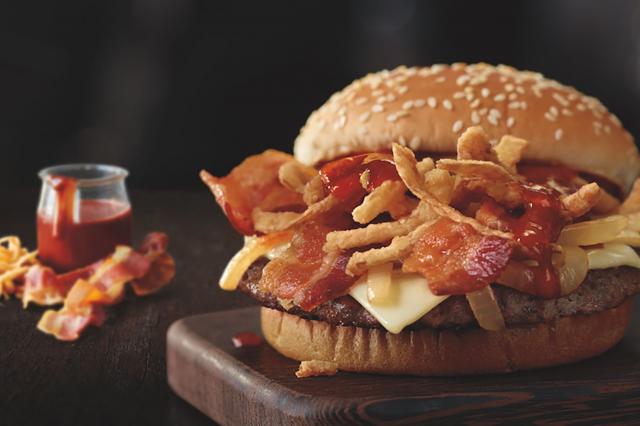 The highest-calorie burgers at McDonald's both clock in at 770 calories, and it's a tie between the Double Quarter Pounder with Cheese and the Sweet BBQ Bacon Burger. While that may seem relatively low compared to the burgers on this list that top 1,000 calories, consider that McDonald's has more than 14,000 locations in the United States alone. That means ample opportunity for Americans to down a burger that could wreak havoc on their health. While both burgers mentioned are calorie bombs, the sweet sauce, bacon and higher-calorie bun featured in the Sweet BBQ Bacon Burger make it higher in sugar (18 grams) and lower in protein (42 grams) than the Double Quarter Pounder, notes nutritionist LeeAnn Weintraub, M.P.H., RD. If you add fries and a soda to that burger, you'll have no trouble consuming more than 1,000 calories in a single meal.

Up next: Just one of these burgers exceeds the daily saturated fat limit...

9. Bacon Ultimate Cheeseburger at Jack in the Box 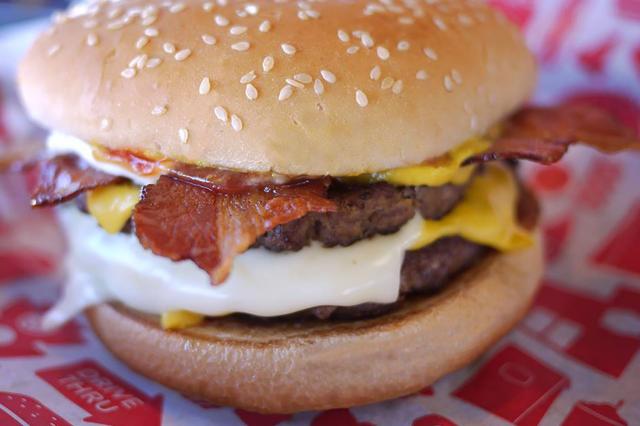 The Bacon Ultimate Cheeseburger, at 930 calories, "weighs in at nearly half of the average person's daily caloric needs and exceeds one's daily saturated fat limit," says Michelle Dudash, RDN, creator of 4Real Food Reboot, an online meal-planning program for people who desire to lose weight and get their energy back.. "It's the over-portioning of all of the foods that tallies up," she adds, "which includes three slices of cheese, two beef patties, three slices of bacon and a generous amount of mayonnaise." She cautions that the sodium in all of these salty ingredients adds up to 69 percent of the daily sodium limit for a healthy person and exceeds the limit for someone who needs to dial down on salt. Adding insult to injury, she says, "With all of these calories, you're only getting one gram of fiber as well as an unnecessary teaspoon-and-a-half of sugar."

Up next: Find out the most caloric burger at Five GuysŌĆ” 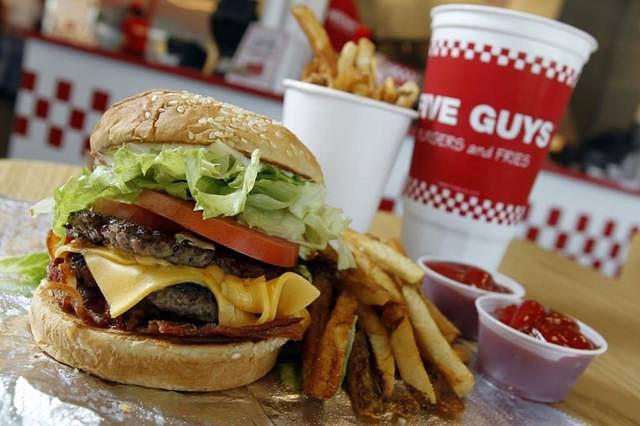 When it comes to the 980-calorie Five Guys Cheeseburger, the multiple beef patties and cheese slices are the culprits once again, according to LeeAnn Weintraub, M.P.H., RD. Coming in at a close second for most caloric burger at Five Guys is the Bacon Burger, at 920 calories. The chain offers "little" versions of its burgers, ranging from 540 to 690 calories, to satisfy that burger craving at a more reasonable portion size and calorie level. Even if you order the little size, be careful: Regardless of the burger you start with, you can choose unlimited toppings for free, so the calorie count could easily skyrocket. The highest-calorie topping to watch out for is mayonnaise (220 calories per ounce). To Five Guys' credit, the menu's nutrition, allergen and ingredient information is all online, making it possible to make an informed choice with a little advanced planning.

Up next: Guess which burger contains 1,880 milligrams of sodiumŌĆ” 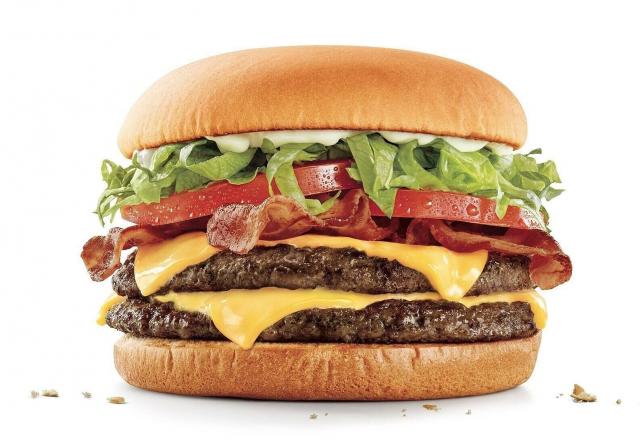 Most of this burger's 1,030 calories comes from two layers of quarter-pound beef patties and American cheese slices, although the mayonnaise and crispy bacon get honorable mention. If you love a good burger (and let's be honest, who doesn't?), you may want to consider sharing this with a friend. You'll get all the flavor of a rich, indulgent burger, but you'll be eating a much more reasonable portion size. And don't forget to balance out the rest of your day's choices with plenty of vegetables, whole grains and water ŌĆö because this burger clocks in at 1,880 milligrams of fluid-retaining sodium (about 80 percent of the recommended daily value).

Up next: This burger features three beef patties and three slices of melted cheeseŌĆ” 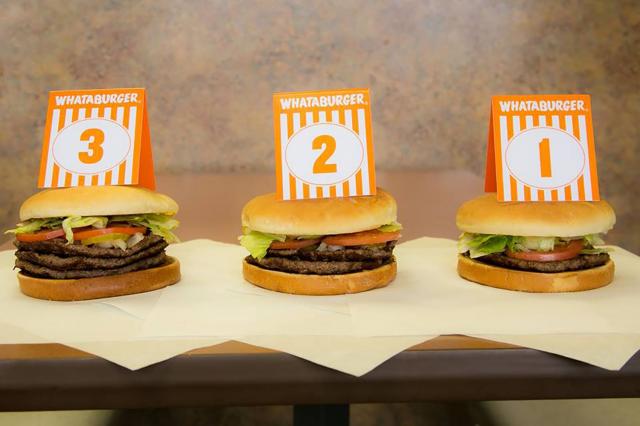 The Triple Meat Whataburger is a triple threat when it comes to heart health: excessive saturated fat, sodium and calories. Most of its 1,080 calories and unhealthful nutrients comes from its three beef patties, and more than half of those calories comes from fat. On its own, total fat isn't the main health concern because healthy fats from foods like nuts, avocados and olive oil are actually good for our hearts and weight-management efforts. However, a third of the total fat (63 grams) in this burger is coming from artery-clogging saturated fat (21 grams). To put that into context, consider that the Dietary Guidelines for Americans is to consume less than 10 percent of calories per day from saturated fats (about 22 grams for a 2,000-calorie diet). Meanwhile, the American Heart Association recommends no more than 13 grams a day for optimal heart health.

Up next: This next burger has a mere 45 calories'-worth of baconŌĆ” 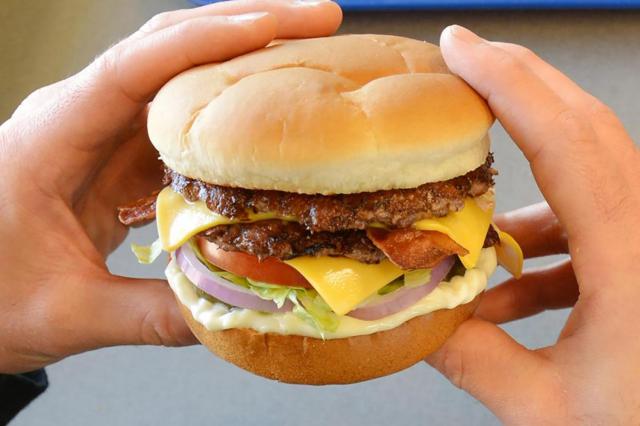 Half the calories in this 1,090-calorie burger come from the beef patty (510 calories), followed by the cheese (210 calories), the bun (200 calories) and mayonnaise (100 calories). You might be surprised to learn that the bacon (45 calories) and butter (15 calories) contribute relatively few calories to the overall burger. But that doesn't give them a pass, especially bacon, considering that the World Health Organization recommends avoiding processed meat like bacon because of its cancer-raising risk. You can slash 480 calories by ordering the "single" version of this burger because of its smaller portions of beef (170 calories) and cheese (70 calories), but it'll still be a 610-calorie burger that is high in saturated fat and sodium and low in fiber.

Up next: This burger features three beef patties and three slices of melted cheeseŌĆ” 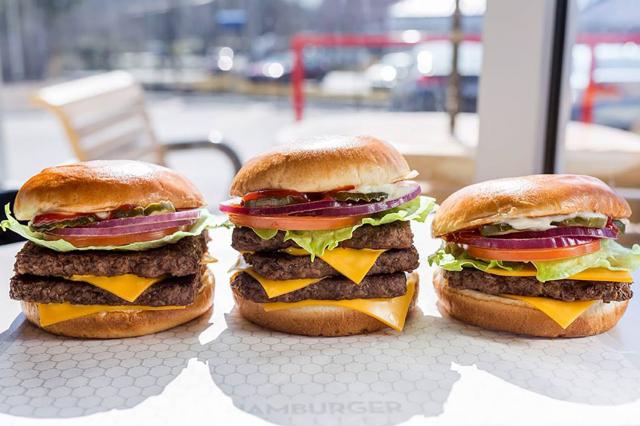 Sometimes more is better, but not when it comes to burgers and your health. The trio of beef patties with three matching slices of cheese in Dave's Triple are where most of its 1,090 calories, 30 grams of saturated fat and 1,650 milligrams of sodium comes from. "It's the sheer volume of this burger that makes it simply too much calorie-dense food for the average person, and that's not even including fries or a drink," warns Michelle Dudash, RDN. With that much burger, there are bound to be some positive nutrients (iron, protein, calcium), but Dudash shares that "even a lean burger will give you the same nutrients."

Up next: See which fast-food burger contains guacamole and a half-pound of beefŌĆ” 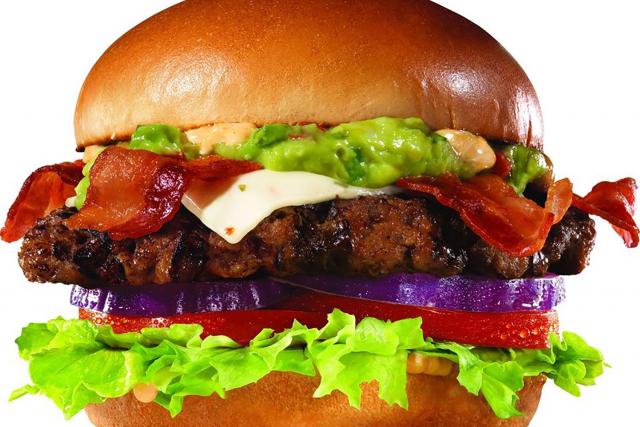 Just in case the name didn't give it away, this Thickburger features a thick half-pound of beefiness. Aside from the bulging beef patty, "you may be surprised to learn that the toppings contribute about 500 calories, almost half [of the total calorie content], to this burger," says Hermosa Beach-based nutritionist Andrea Giancoli. "This burger clocks in at a whopping 1,200 calories, and the biggest calorie culprits are the Santa Fe sauce (210 calories) and the cheese (150 calories)." She says not to worry as much about the guacamole (60 calories), "which is not too bad and you'll get some healthy fats." Bottom line: The small amount of healthy fats and the fact that you see lettuce and tomatoes on this burger doesn't make it a healthy choice.

Up next: The following burger has a side of onion rings stuffed between its bunsŌĆ” 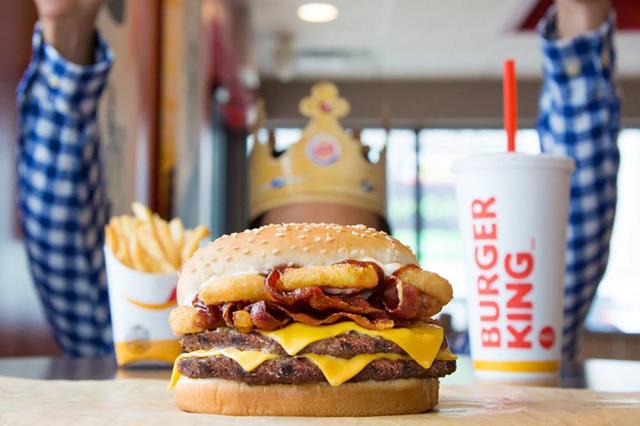 The Rodeo King features two beef patties, American cheese and bacon ŌĆö and that's not even the naughtiest part. Registered dietitian Lindsey Pine, owner of TastyBalance Nutrition explains, "Many of the calories from this 1,250-calorie burger come from the fried onion rings [that are stuffed between the buns]." In total, this behemoth burger has 31 grams saturated fat, which is one-and-a-half times the daily maximum limit. Pine also warns that the refined white-flour bun, onion ring breading and sugar-filled barbecue sauce "aren't doing any favors for your blood sugar levels, especially if you have prediabetes or diabetes."

1. The 7x7 at Steak┬ĀŌĆÖn Shake 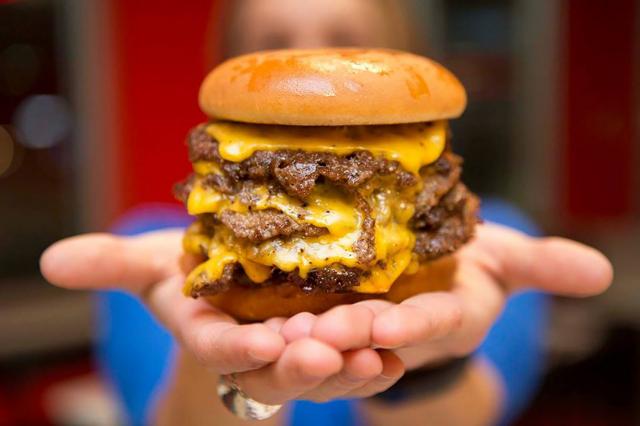 At the top of the list, coming in at 1,660 calories, is the 7x7 burger from midwest chain Steak 'n Shake. "The 7x7 is a monstrosity of a burger whose only redeeming value is that it probably makes for shocking Instagram pictures," says registered dietitian Lindsey Pine. It's named for its seven layers of beef patties and melted American cheese, which is also where the majority of its calories come from ŌĆö but that's not its only nutritional downfall. "This burger has six grams of trans fat, which is the type of fat to be avoided at all costs [because of] its ability to raise bad cholesterol (LDL) levels, lower good cholesterol (HDL) and increase risk for heart disease." Pine adds, "I've literally never seen a food with six grams of trans fat."

Read more: The Impossible Burger Can Change the Planet 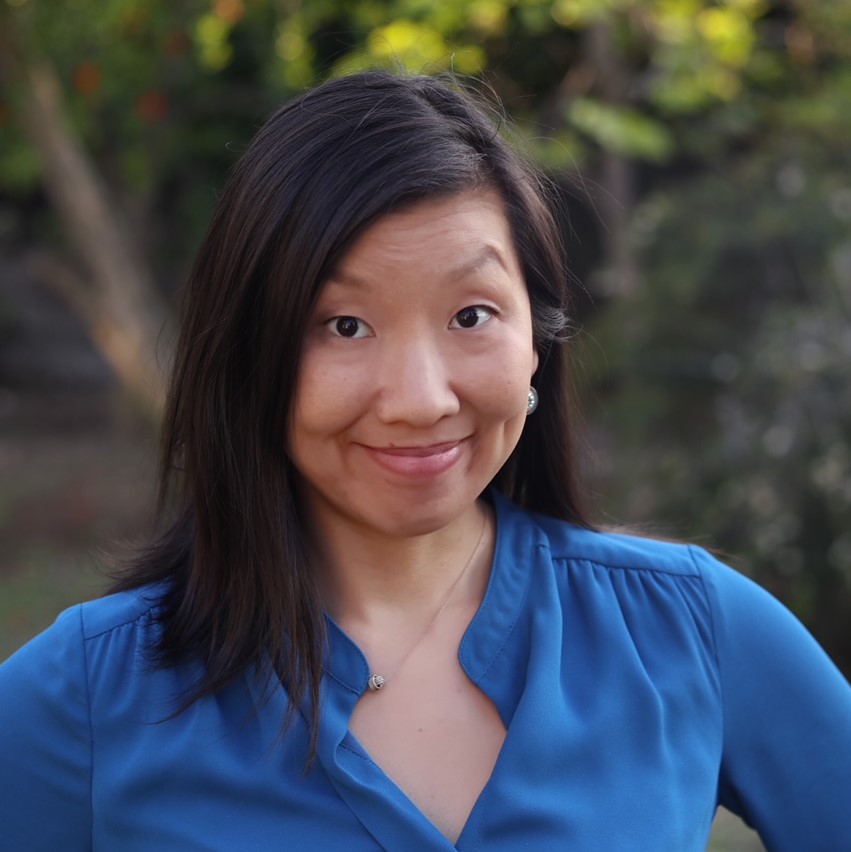 Maggie Moon, MS, RD is the best-selling author of The MIND Diet (2016), the owner of MINDDietMeals.com, and a writer for Livestrong.com. Her nutrition work has taken her across the country and around the world: from NYC public schools to U.S. commodity boards, from supermarkets to multibillion-dollar global companies. Ms. MoonÆs unique career has been profiled in the Academy of Nutrition and DieteticsÆ book, Launching Your Dietetics Career (Eat Right Press, 2011, 2016). She completed her clinical training at New York Presbyterian Hospital of Columbia and Cornell, and holds a master of science degree in Nutrition and Education from Columbia UniversityÆs Teachers College, with a bachelor of arts degree in English Literature from U.C. Berkeley. Her culinary school training is from The New School of Cooking in Los Angeles, CA. She lives in LA with her husband and a giant shelf of cookbooks. Learn more about her at www.maggiemoon.com, www.minddietmeals.com, and connect with her @minddietmeals on Instagram.