Miscarriage, or the death of a child in utero, is one of the worst fears of an expectant mother, and unfortunately a common occurrence. According to the American Pregnancy Association, as many as one quarter of all recognized pregnancies end in miscarriage.

Miscarriage, or the death of a child in utero, is one of the worst fears of an expectant mother, and unfortunately a common occurrence. According to the American Pregnancy Association, as many as one quarter of all recognized pregnancies end in miscarriage. If you are pregnant with twins or higher older multiples, it's possible to miscarry just one baby and remain pregnant with the others. 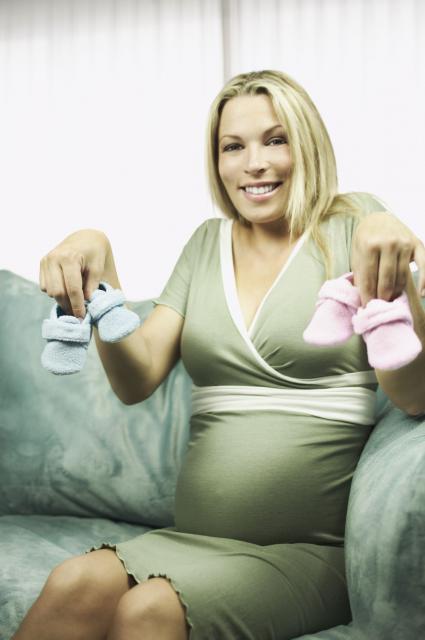 Vanishing twin syndrome is the term given to a multiple pregnancy that goes awry, most often in the first trimester. One baby does not develop at the same rate as the other, and the tissue of the less-developed baby reabsorbs into your womb, sometimes before you even realize you were pregnant with twins in the first place. The other fetus usually continues to grow and develop appropriately through the entire gestation period. Women older than 30 years old have a higher risk of experiencing vanishing twin syndrome than younger mothers. Some women do not show any signs of trouble, while others experience cramping and bleeding consistent with miscarriage.

Miscarriage of one baby in a multiple pregnancy is still possible after the first trimester. Losses later into the pregnancy may still be considered vanishing twin syndrome, but this is rare. The more likely reason for you to miscarry one fetus while remaining pregnant with the other is an abnormality of the placenta or umbilical cord, or a disorder in the child that becomes fatal. The exact nature of the miscarriage will determine how the pregnancy proceeds; you may be put on bed rest to protect the remaining baby as much as possible until your due date.

Reduction of a pregnancy is not a miscarriage in the strict sense of the word; miscarrying means that your baby has died spontaneously without action on your part. Reduction, however, is a case in which you may have decided to remove one fetus from the womb before viability, due to a medical condition that will not allow the child to survive upon birth. Reduction is also performed by some doctors in the rare case that you are expecting higher order multiples.

The sadness you feel at having miscarried one baby combined with the joy you experience knowing that the other fetus is still thriving, can be difficult for parents-to-be to endure. The emotions you experience on both sides of the spectrum at once seem diametrically opposed from one another, but rest assured that this time of confusion is to be expected, and in your situation, perfectly normal. Support from your family, friends and perhaps a spiritual leader or counselor can help you sort through your emotions and grieve for the baby you lost, while maintaining hope and happiness as you await the birth of your surviving child.

Erica Roth has been a writer since 2007. She is a member of the Society of Professional Journalists and was a college reference librarian for eight years. Roth earned a Bachelor of Arts in French literature from Brandeis University and Master of Library Science from Simmons College Graduate School of Library and Information Science. Her articles appear on various websites.