It's highly unlikely that a nutritional deficiency is causing your nails to split and peel. But low levels of iron, vitamin A and zinc can affect nail health.

Most cases of brittle, splitting and peeling nails aren't due to a vitamin deficiency. Onychoschizia, the medical term for splitting nails, affects more women than men and typically results from excessive exposure to water or harsh, drying chemicals, such as nail polish remover and dish detergents. 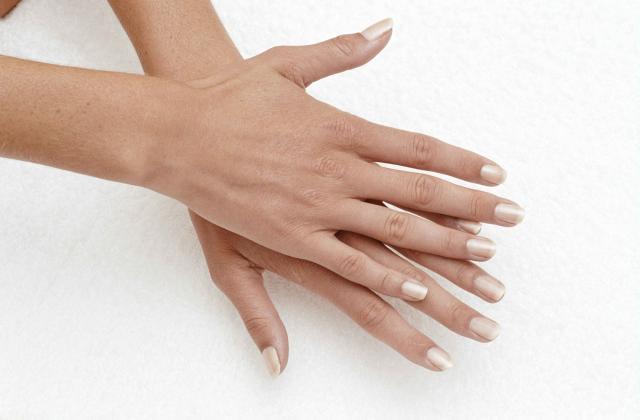 However, some vitamin deficiencies can affect your nails, causing them to become brittle and more likely to split and peel. If you have splitting and peeling nails that aren't due to environmental causes, consult your physician for the correct diagnosis before treating them with a vitamin supplement.

You need iron to manufacture hemoglobin and myoglobin, the proteins responsible for transporting oxygen to your tissues and muscles, as well as for proper growth and development and functioning of your immune system. According to the Office of Dietary Supplements, iron deficiency is the most common nutritional deficiency worldwide and is caused by an inadequate amount of iron in your diet, poor iron absorption from your digestive tract or excessive bleeding, including heavy menstrual periods.

Severe zinc deficiency is very rare in developed countries, and most cases are due to an inherited condition, acrodermatitis enteropathica, caused by an inability to absorb zinc properly. Zinc is critical to normal growth and development and is needed for production of about 100 different enzymes.

A zinc deficiency is characterized by delayed growth, frequent infections, slow-healing wounds and brittle, splitting nails with white spots. You may be at higher risk for a mild zinc deficiency if you are a vegetarian, a sufferer of Crohn's disease or other conditions causing malabsorption of nutrients, pregnant or an alcoholic. Zinc is found in oysters, beef, pork, yogurt and beans.

Vitamin A is not just one substance, but a group of carotenoid compounds you need to maintain a healthy immune system, vision, mucous membranes and skin. Vitamin A levels have a direct impact on your levels of iron. Vitamin A is required to transport iron from storage, so inadequate vitamin A levels create a functional deficiency in iron. As a result, you can also develop symptoms of iron deficiency, including pale skin, fatigue and brittle nails that split.

Foods that are high in vitamin A include carrots, liver, spinach, cantaloupe and fortified foods, including milk and breakfast cereals.

Although low levels of biotin don't cause brittle nails, supplementation with biotin does appear to be effective in treating dry, brittle nails that split and peel. Biotin, which is also referred to as vitamin H, is one of the eight B vitamins.

According to the University of Pittsburgh Medical Center, biotin is often recommended as a remedy for weak and splitting nails. However, there is very little evidence to support these claims. Get your physician's advice before taking biotin for brittle, splitting and peeling nails.