Nails are made of many layers dead keratin protein cells, which are similar to hair and skin cells. The hard part of the nail, called the nail plate, protects the sensitive skin underneath, called the nail bed. The material that makes up the nail plate is formed in the matrix, located under the cuticle. According to the American Academy of Dermatology, fingernails grow an average 2 or 3 millimeters per month, while toenails grow about 1 millimeter per month. Many factors influence how fast individual nails may grow. 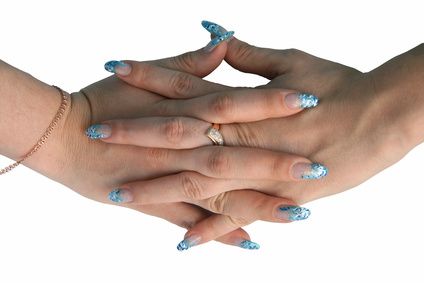 The speed of nail growth changes throughout a person's lifetime. Infant nails grow more slowly than adult nails, but children's nails grow more quickly than those of adults. Nails tend to grow the fastest between the ages of 10 and 14. After that, growth begins to slow, and continues to slow with age.

Toenails grow more slowly than fingernails, and the growth rate of each fingernail also differs. The nail on the pinky finger grows the slowest. The thumbnail also grows relatively slowly. On most people, the nails on the index and middle fingers grow the fastest. In general, the difference in growth is quite small, and is measured in tenths of a millimeter.

The weather can affect nail growth. Nails grow faster in warm weather than they do in cold weather.

Cutting your nails causes them to grow a little more quickly. Nail-biting also makes nails grow more quickly. Compulsive nail-biting, however, can lead to infection or permanently damage the nail and nail bed, which may cause a nail to stop growing.

The condition and growth rate of the nails can be indicative of a health condition. The American Academy of Dermatology states yellow nails may indicate diabetes, while yellowing thick nails that grow slowly might be a symptom of a lung condition. Nail growth may also be slowed by poor circulation.

Sarah Metzker Erdemir is an expat writer and ESL teacher living in Istanbul since 2002. A fiction writer for more than 25 years, she began freelance writing and editing in 2000. Ms. Metzker Erdemir holds Bachelor of Arts degrees in Romance languages and linguistics as well as a TESOL Master of Arts degree. She has written articles for eHow, Garden Guides, and ConnectEd.