Baby formula is expensive, and a hungry baby can gobble up 30 or more ounces per day, costing parents as much as $3,000 per year, or more if their baby needs specialized formula.

Baby formula is expensive, and a hungry baby can gobble up 30 or more ounces per day, costing parents as much as $3,000 per year, or more if their baby needs specialized formula. As a parent on a tight budget, you may be tempted to water down the formula to make it last longer, but that practice can be very harmful for your baby. If the price of formula is a hardship, your pediatrician may be able to provide samples free of cost to you. In addition, some formula companies will send you free samples, especially if you've given birth to multiples. 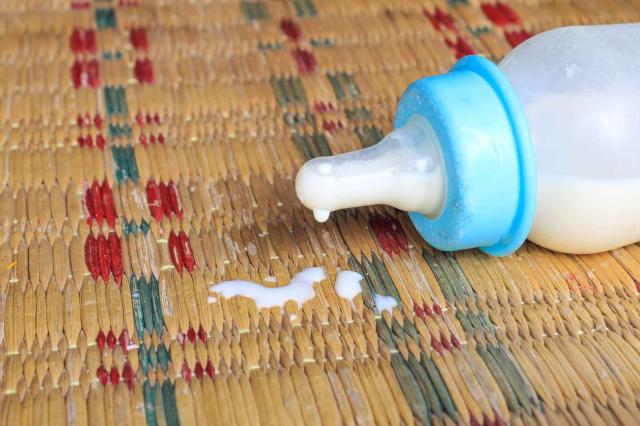 Too much water is dangerous for infants, according to ScientificAmerican.com. Babies don't have the ability to process water out of their bodies until they are at least 10 months old, and too much water can dilute their blood and interfere with their electrolytes, causing sodium and potassium levels to plummet and possibly resulting in brain damage or seizures. A Florida mother tried to save money by shorting each batch of formula by two scoops, according to a report on ABC News, and her 5-month-old son suffered a seizure, was underweight and almost died because of water intoxication.

Baby formula is designed to give babies the exact nutritional building blocks they need to grow and thrive, including protein, fat and carbohydrate as well as vitamins and some minerals. Changing the concentration of the formula will affect the nutrition your baby receives from it. Baby formula is specifically designed to give your baby the appropriate nutrition for age and weight. Some formulas are fortified with additional minerals, such as iron, to meet specialized needs of babies. Diluting baby formula means you're also diluting the iron your baby needs, potentially causing anemia.

Babies are sensitive to the fluoride that exists in tap water, reports the Fluoride Action Network. If you dilute your baby's formula with water that has been treated with fluoride -- as most public water sources are -- you risk a fluoride overdose for your child. Excessive fluoride can permanently damage tooth buds, causing your child's teeth to be stained brown or black when they emerge. Check bottled water, too, as much of it is treated with fluoride.

Some treated tap water has high levels of sodium. A study cited at Doctor's Guide Channels showed that babies developed hypertension when given too much sodium-infused water when formula was prepared according to the manufacturer's directions. Overdiluting formula can cause sodium levels to increase even more.

Dangers and Symptoms of Failure to Thrive

When you see a baby face with round cheeks that you just want to pinch, that is a good sign. Fatty tissue usually means your baby is thriving and eating well. The absence of fatty tissue is a symptom of failure to thrive, or poor growth. Excessively wrinkled skin, tiny arms and legs, visible ribs and thin buttocks are also symptoms to look for. Malnutrition in an infant can lead to brain damage and possible death, according to a report from the Child Welfare League of America.

Erin Monahan is an author and editor with over 25 years experience. She has written on a variety of topics including celebrity interviews, health reporting and parenting. Her work has appeared in daily newspapers and national magazines, including "Wondertime," and on websites such as Kaboose.com. She was recently named one of the top writers in Pennsylvania. She holds a Bachelor of Arts from Simmons College.