Working parents often place their infants in child care centers or have a caretaker watch them. Hara Estroff Marano, a Psychology Today writer, reports that researchers have found an array of effects on babies who are in non-parental care for at least 10 hours per week.

Working parents often place their infants in child care centers or have a caretaker watch them. Hara Estroff Marano, a Psychology Today writer, reports that researchers have found an array of effects on babies who are in non-parental care for at least 10 hours per week. These effects touch many areas, including language development, memory skills, social relationship and overall behavior. Although researchers are always adding to subject, evidence points to definite differences between babies raised by mom and those in other people's care for extended periods of time. 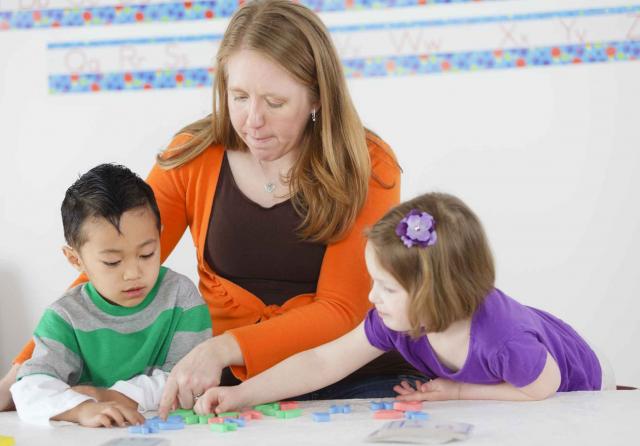 Several recently released long-term studies have found that infants placed in child care are more likely to misbehave at school or get into fights by the time that they reach sixth grade. Teachers also reported that they are more argumentative, according to Marano. Dr. Jay Belsky, who heads the Institute for the Study of Children, Families and Social Issues at London's Birkbeck University speculates this may result from the inability of babies to form secure attachments, leading to the later problems.

Babies who are placed in high-quality day-care situations often develop a better vocabulary which carries on to the later school years, Marano reports. This effect is likely because of early exposure to adult conversation. The early childhood Ounce of Prevention Fund also notes that children who hear more words on a consistent basis during their first three years have a more expansive vocabulary as they age and develop. Infants who are in child care situations that feature the constant use of quality words may eventually develop a richer vocabulary than those who go without.

Babies tended to develop stronger social skills in day care, but Marano states these effects did not last as the youngsters grew older. However, some researchers believe they may reappear later as children continue to develop. The National Network for Child Care notes that early childhood professionals have a pivotal role in the child's social development. Even at the infant age, a teacher's actions, instructions and own behaviors can make the difference between a young child learning positive social skills and missing out on this crucial area of growth.

High-quality child care supports a baby's cognitive development, preparing him for higher academic achievement upon entering school. This appears to result from being provided with intellectual stimulation during the early developmental period, leading to better performance in reading, math and memory-related tasks, Marano explains.

Dr. Shari Nethersole, a pediatrician at Children's Hospital in Boston, warns that babies in group child-care situations tend to get more infections, because they are exposed to many other youngsters. Rotavirus is particularly common, because it tends to affect babies who are not yet old enough to be potty trained, and it is a hard infection to control.

Many babies placed in child care, particularly those with teenage mothers or infants from low-income backgrounds, see a positive effect when it comes to the development of intelligence. Young children's IQ scores were an average of 10 points higher than children from similar backgrounds who did not attend day care by the time they were 4 years old, according to a National Institute of Child Health and Human Development study.

Based in Kissimmee, Fla., Barb Nefer is a freelance writer with over 20 years of experience. She is a mental health counselor, finance coach and travel agency owner. Her work has appeared in such magazines as "The Writer" and "Grit" and she authored the book, "So You Want to Be a Counselor."