According to the American Academy of Pediatricians (AAFP), two to three percent of infants are have developmental disabilities. Chromosomal abnormalities, genetic syndromes, birth injuries and environmental factors can cause intellectual disabilities. 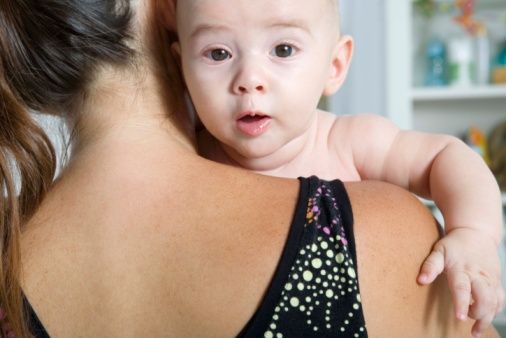 Certain genetic disorders are associated with some degree of mental disability, such as Down Syndrome. Infants with genetic disorders often have certain facial or physical characteristics that alert the clinician or the parents to a potential problem. Dysmorphic or unusual features such as heavy eyebrows, low-set ears or widely spaced eyes may be a sign of a syndrome or genetic disorder that causes intellectual delays, according to the AAFP. Hand and feet anomalies, small size and small head circumference may also be signs of disorders that impact mental abilities.

Infants with profound intellectual, cognitive, or developmental disabilities may have poor muscle tone, poor suck, or an inability to coordinate suck and swallow, according to the AAFP. Children who are affected to a lesser degree may be slow to sit, stand and slow with other physical milestones, according to Keep Kids Healthy. They may not roll over by six months or crawl by 12 months. However, less than one percent of children who are behind the "chart" are just slow starters and catch up eventually, according to Keep Kids Healthy.

While it's difficult to assess speech in babies, an inability to repeat sounds by three to six months, or a lack of babbling by five to nine months are signs of delayed speech and can indicate a possible disability. Babies normally say their first word by 14 months and use two-word combinations before age two, according to Keep Kids Healthy.

Babies normally turn toward a voice as newborns, and smile either spontaneously or at a face by one to two months. Not meeting these milestone may indicate intellectual impairment. Other signs of developmental lags may include a disinterest in other people, lack of recognition of parents by three months and lethargy, according to Keep Kids Healthy.