The development of the neck in babies is an important step in reaching all of the developmental milestones of infancy. A newborn starts out with very little control over his neck, leading him to resemble a rag doll at times and requiring parents to support his fragile head and neck until he begins to develop control.

The development of the neck in babies is an important step in reaching all of the developmental milestones of infancy. A newborn starts out with very little control over his neck, leading him to resemble a rag doll at times and requiring parents to support his fragile head and neck until he begins to develop control. 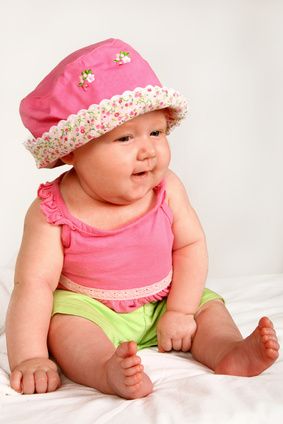 A newborn's neck muscles are extremely weak and cannot support his head, but by the end of his second month his muscles will have strengthened enough to briefly lift his head when lying on his tummy or when propped up on a parent's shoulder. At 3 to 4 months of age, he should be able to hold up his head at a 45 degree angle during tummy time and look around to see what else is going on around him. At 6 months old, a baby has developed fairly good neck control and can hold his head steady when sitting, propped up on someone's shoulder or in a carrier.

Neck development in babies is important because it precedes many other baby milestones. Good head control is needed before a baby can sit up, roll over or crawl. Properly developed neck muscles also help a baby learning to eat solid foods, since they are needed for swallowing.

Before a baby reaches the point in development where he can lift or hold up his head on his own, caretakers must be extremely careful to protect his fragile neck from damage. A baby under 1 month old should always have his neck supported when he is picked up or held. Babies older than a couple of months should continue to be given head and neck support as needed until they have developed sufficient head control of their own. Any slings or carriers used to transport the baby should also provide neck and head support when the infant is small.

Parents don't have to do specific exercises to develop a baby's neck muscles, since they will develop naturally on their own. If you want to, though, there are a few things that may help speed up the process. Tummy time is probably the most effective way to encourage neck development in infants. Tummy time involves lying an infant on his stomach for 10 to 15 minutes each day to encourage him to lift his head to see you or toys that you have put in front of him. Older babies, about 3 to 4 months or older, can be propped up into a sitting position to practice holding up the head. Another fun exercise for babies over 3 months old is to slowly and gently pull the baby's arms to lift him from a lying to sitting position, causing him to lift his head to try and keep it aligned with his body.

If a baby doesn't seem to be improving his head control and still seems to have a floppy neck by 3 or 4 months of age, bring him to a pediatrician to evaluate his neck development.

Bridget Coila specializes in health, nutrition, pregnancy, pet and parenting topics. Her articles have appeared in Oxygen, American Fitness and on various websites. Coila has a Bachelor of Science in cell and molecular biology from the University of Cincinnati and more than 10 years of medical research experience.